“This wasn’t the most escapist form of prime-time entertainment” 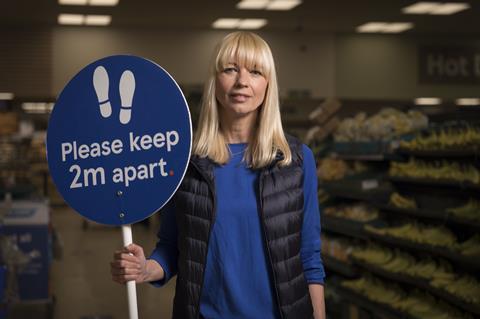 “Factories can’t keep up with demand because of the risk of exploding flour. Wait, what? Perhaps everyone but me knew this. There were plenty of little nuggets like this sprinkled through the programme, but I can’t say I enjoyed it much. For this I don’t blame the presenters, Sara Cox and Ade Adepitan, but lockdown itself: supermarkets are pretty much the only places we’ve been allowed to visit in these past few weeks, so spending an hour in one via television wasn’t the most escapist form of prime-time entertainment.”
Anita Singh, The Telegraph

“Keeping Britain Fed was a sprightly look at how supermarkets have managed to stay open and food suppliers keep up with the added demand since lockdown was announced in March. This certainly not a confrontational documentary but there was one extraordinary piece of information that puts the Government to shame. Declan Ferguson, the technical director of a sausage factory in Northern Ireland, revealed that as soon as he heard about Wuhan going into lockdown, he ordered enough PPE equipment to protect his factory workers until the end of July. If Marcus Rashford is the new Prime Minister, can we have Declan as his deputy, please?”
Rupert Hawksley, The i

“Behind-the-scenes supermarket shows are always heavy on statistics, but Sara had some genuinely impressive ones. As the crisis struck, Britons made 42 million extra shopping trips. Chocolate and booze sales were up by nearly a third.And as we all got baking, one flour producer took ten weeks’ worth of orders in a single day. That’s a lot of sourdough. These documentaries are usually TV filler, but Keeping Britain Fed really did offer food for thought about how our altered world is going to function.”
Christopher Stevens, Daily Mail

“This is a romp, with every actor pitch-perfect in their role. Hoult has never been better, Fanning does a fantastic job as the Pollyanna with steel at her core and Gwilym Lee as cuckolded Grigor Dymov hits his every scene out of the park. The script, adapted by Tony McNamara from his own play, shines. The whole is possibly slightly overlong – eight episodes might have done better, especially if they lost some of the more gratuitously violent scenes that occasionally overstep even the broad bounds set by its comic and satirical intentions. But it also offers oblique commentary on the dangers of letting a capricious, narcissistic, bullying man-child rule a nation.”
Lucy Mangan, The Guardian

“Beginning with Catherine’s arrival in Russia as a hopeful 19-year-old, the series very quickly reveals itself as anything but a sleepy period drama. There are swear words every 30 seconds, a lot of sex and plenty of historical innacuracies. Seeming to take its cues from Academy Award-nominated film The Favourite it is part of a new trend for modernising historical drama. At times, it leans too far into its ebullient tone, revelling in its own filth so much that the more serious moments feel a little out of place. It is the acting, though, that really makes it special.”
Emily Baker, The i

“Tragic tales about the loneliness of fame are not exactly new. So I did wonder what Reggie Yates might have to add with Make Me Famous, a one-off drama about Billy Fearon (Tom Brittney), a young lad whose life falls apart after appearing on a fictional reality series called Love or Lust. The short answer is, nothing new. To leave it there, though, would be entirely unfair because Make Me Famous, which was based on numerous interviews with reality stars, brought a claustrophobic, urgent clarity to an old narrative.”
Rupert Hawksley, The i

“If you haven’t seen this show before, it is essentially Grand Designs without the schadenfreude. There is something enjoyable about seeing eccentricity at work. Where Grand Designs presenter Kevin McCloud winces and shakes his head at dry rot and the cost of all that glazing, George Clarke beams and enthuses. He loves everything. However, the main fault of Amazing Spaces is that it packs too many things into each episode, meaning it feels a bit lightweight.”
Anita Singh, The Telegraph