“Anna Friel is a fine actress who deserves better than this crime-by-numbers nonsense.” 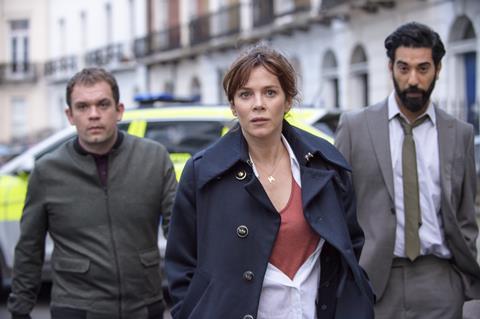 “It is just as well that Friel is a good actress because there would be no other reason to return to a grim drama set to comical Hammer House of Horror sound effects. Luckily, many of the characters were so central casting-clichéd that the horror didn’t hit home as much as it might have done.”
Carol Midgley, The Times

“This opener was a box-ticking exercise in Nordic noir tropes. This stuff has become so clichéd in 21st-century whodunits, it has lost its power to thrill. Which must be why webcams, food banks and zero-hours contracts were all thrown into the mix in an attempt for it to seem timely. Friel is a fine actress who deserves better than this crime-by-numbers nonsense.”
Michael Hogan, The Telegraph

“Get some real issues in there, and maybe people will take it seriously and not notice how tonto it is. Tonto it is, though. But rather delightfully so, certainly more of a hoot than David Hare’s state-of-the-nation thriller Collateral on the other side.”
Sam Wollaston, The Guardian

“The dialogue is so hammy it ought to come with a warning for vegetarians. Marcella’s soon having blackouts again. And who can blame her? Memory loss is a practical response to bosh like this.”
Christopher Stevens, Daily Mail

“Marcella’s funny turns, I know, are a terrible affliction. They’re not actually funny per se. What they, however, is her unique selling point and every TV cop needs one of those. Without them, would anything really set this show apart from so manky others of this ilk?
Mike Ward, Daily Express

“I enjoyed the second sermon — sorry episode — of Collateral, but it would be nice if every now and then David Hare trusted viewers to get his political messages rather than clubbing us over the head with them.”
Carol Midgley, The Times

“BBC thriller Collateral really ramped up the drama in this second episode. The result was an utterly gut-wrenching final few minutes, which brought the focus firmly to bear on two very damaged women. And it made for fascinating – and crucially sympathetic – viewing.”
Mark Butler, The i

“24 Hours In Police Custody featured a tale of internal corruption and the race to nail a bent copper, rivalling the brilliant Line Of Duty. From the first scene, this was a compelling and original storyline — one proving that, however inventive screenwriters can be, real life is more astonishing.”
Christopher Stevens, Daily Mail

“After five series of 24 Hours in Police Custody, you have to wonder how many more arresting crime stories there are out there. Judging by the first episode of series six last night, there are still some truly astonishing tales to tell. ‘Sex and Corruption’ was gripping viewing, even if it did expose the depths of human depravity so nakedly.”
Daisy Wyatt, The i

“They’d chosen a remarkable case with which to resume this absorbing documentary series: a police officer blackmailing a man who’d visited a prostitute. A drama writer would have had a field day with it.”
Mike Ward, Daily Express