MasterChef: the Professionals; Nadiya’s American Adventure; The Grand Tour; Inside Lidl at Christmas 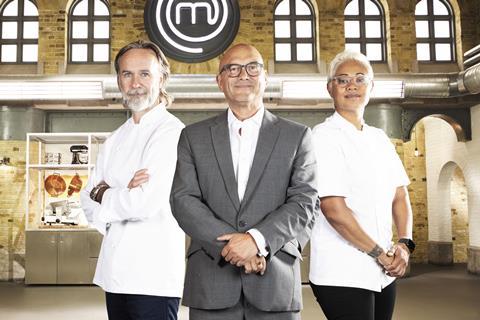 “Taste is a bizarre thing. Gregg Wallace raves about the complex interplay of ingredients on his tongue. ‘I’ve never had that combination of flavours before,’ he gasped as he tucked in to water buffalo with potato cannelloni. We’ll have to take his word for it. Even the most advanced, ultra-HD, 8k Smart-TV can’t let you taste the dishes in a cookery contest. And no one will be replacing the turkey on their Christmas dinner table with water buffalo this year.
Christopher Stevens, Daily Mail

“The main takeaway was that even with social distancing and that mysteriously disappearing contestant earlier in the series, MasterChef managed to produce an entertaining series in which you could barely see the join. It was a brief taste of normality.”
Carol Midgley, The Times

“As she has travelled around, breaking bread with the people of Louisiana and California, it has become clear that what we are witnessing is not just a talented presenter at work (although surely there is no more wonderfully expressive face on television). Nor is this a simply an example of why increased onscreen diversity is an uncomplicated good. The commonalities that Hussain and her new friends share – being children of immigrants; being anxious parents; being members of a marginalised community – act to level the often uneven interviewer/interviewee dynamic, gifting her (and, vicariously, us) with special insight and access. That awkward outsider shtick can work, of course (see Louis Theroux), as can the authoritative foodie stranger (Anthony Bourdain). But American Adventure triumphs because, instead of trying to squeeze its presenter into a pre-established formula, it plays to her individual strengths.”
Ellen E Jones, The Guardian

“One grizzled fellow was grilling meat on a makeshift barbecue fashioned from an abandoned shopping trolley. It looked much more delicious than any of the constrained, pretentious fare on Masterchef. Why there has never been a telly contest based on street food is a mystery. It ought to offer everything — lively characters, mouth-watering new dishes, travel and inspiration. Surely, viewers would rather see flatbreads and chili peppers sizzling on a roadside stall, than offal arranged like modern art on a plate the size of a bedsheet.”
Christopher Stevens, Daily Mail

“It turned out to be a massive let-down – despite being launched a day early as a Christmas present to fans. Jeremy Clarkson, Richard Hammond and James May’s shtick is beginning to look as clapped-out as a minicab with too many miles on the clock.”
Michael Hogan, Telegraph

Inside Lidl at Christmas, Channel 5

“I had assumed from the title this would be a behind-the-scenes insight into how Lidl manages to undercut its rivals to be so cheap, perhaps letting us in on its suppliers, ethics and tactics. But while it did explain the concept of having a few key products at a killer price and the “Wigig” strategy (“when it’s gone, it’s gone”), only about 40 seconds was spent on ethics and it was mostly a prolonged Lidl advert set to terrible CBeebies music.”
Carol Midgley, The Times