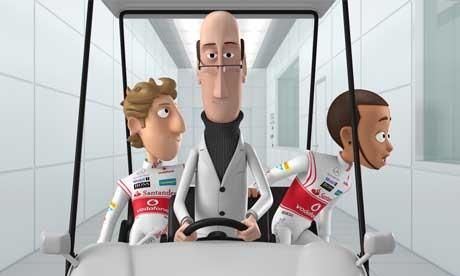 McLaren Animation has been set up as a joint venture with Oscar winning visual effects and animation studio Framestore.

Tooned, a CGI series will feature the voices of Lewis Hamilton, Jenson Button and Alexander Armstrong.  It will be debut on the Sky Sports F1 channel on 8 July.

Armstrong will voice Professor M, who he described as a blend of Steve Jobs and Q from James Bond movies.

Chris Waitt and Henry Trotter, the writers and directors of Tooned, have previously worked on A Complete History of My Sexual Failures, Fur TV and J-Factory.

The animated division will be closely aligned with McLaren Marketing and Ron Dennis, executive chairman of McLaren Group, said it would create a “more demographically accessible ‘face’ for McLaren”.

“Tooned is the result of extensive market research carried out by McLaren, which John [Allert], our Group Brand Director, and I then analysed carefully together. It’s an exciting and creative concept that addresses the insights gleaned from our research in a very innovative way”, he added.

Framestore founder and chief executive officer Sir William Sargent said: “The films you see today are a start – and their simplicity and quality hide an enormous commitment in time and technology from a world class team at Framestore – one that has been excited by the McLaren challenge in the same way as they have on a Harry Potter or Superman film.”