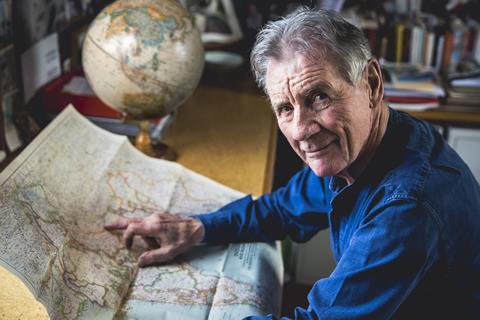 “Scenes of Palin visiting the gun-manufacturing town of Darra and handling a replica (but very much working) Kalashnikov rifle were just as riveting and, to a western eye, shocking as they were in 2004. Watching him struggle to acclimatise to Everest’s altitude prompted an equal amount of compassion, even though we know he makes it in the end largely thanks to the beautiful view. This hour proved there is great merit in revisiting old travel shows, particularly those presented by the masterful Michael Palin. But extra asides and empty platitudes only cheapen the magic of seeing the world through your TV. Thank goodness many of his original series are still on iPlayer.”
Emily Baker, The i

“Palin must tire of being called the nicest man in Britain but the reason this retrospective works is because the older man’s reflections on his stonking and rather gruelling trips are quiet, modest and never involve “look at what I achieved” willy-waving. They are done with gratitude not grandstanding, Palin scarcely able to believe his luck that for so long this was his job. Without that self-effacing quality these travelogues would have had a quite different tone and wouldn’t have worked half as well.”
Carol Midgley, The Times

“Whatever its flaws, this did what Palin always tries to do. It filled you with the beauty and the wildness and the strangeness of every place, provided perspective, and reawakened you to you and your own culture’s tiny, fleeting importance in the grand scheme of things. Maybe we shouldn’t ask for more from a travel documentary. Stop moaning, Mangan.
Lucy Mangan, The Guardian

Bradley Walsh’s How To Win A Game Show, ITV

“There’s one every Christmas — attractively packaged, intriguingly wrapped, big and glittery and exciting, a present you can’t wait to see … and that turns out to be a great fat disappointment. This year it was How To Win A Game Show hosted by the king of quiz hosts, Bradley Walsh. What a smasher it sounded. Brad was going to teach us how to get picked for telly’s big money competitions and walk away with the top prizes … or so it seemed. Instead, all we got was a tatty compilation of excerpts from the sort of Saturday night fare known in the business as ‘shiny floor shows’, including some so obscure that I’d forgotten they’d ever existed.”
Christopher Stevens, Daily Mail

“It has been decent entertainment, especially when Mrs C (Ruth Wilson), clad for some reason in riding gear, kicked her monkey (no, not a euphemism, thank you), the daemon who represents her soul. “You’re either with me or against me,” she told it, effectively speaking to herself. It ended with an obvious nod to the third series, which is fine. But can it move a bit quicker next time?”
Carol Midgley, The Times