“I hadn’t been feeling festive, but these two middle-aged men talking about life and death with warmth and honesty in beautiful countryside imbued me with the spirit of Christmas.” 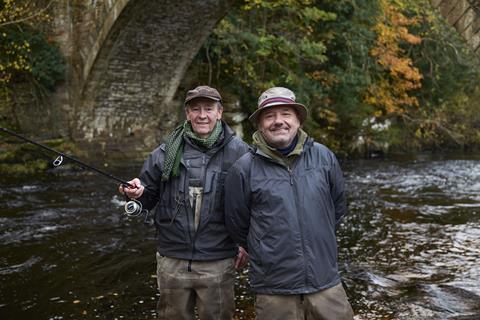 “Paul Whitehouse and Bob Mortimer’s love letter to angling and rambling was back for a delightfully harrumphing one-off. And as we slalomed towards peak enforced jollity, their crotchety chemistry proved a charming counterpoint.”
Ed Power, The Telegraph

“I hadn’t been feeling festive, but these two middle-aged men talking about life and death with warmth and honesty in beautiful countryside imbued me with the spirit of Christmas; not a perfect tree nor efficient online shopping, but the human beings we might be lucky enough to have around to go fishing with.”
Kasia Delgado, The i

“The finale, when the West End cast of Only Fools and Horses turned up to serenade Whitehouse, felt more than a little scripted. But good Christmas programmes are thin on the ground this year and this remains a gem.”
Carol Midgley, The Times

“As the duo head to Middlesbrough where Bob grew up, they’re like an old married couple — with Paul as the long-suffering husband and Bob as his madcap missus. Paul doesn’t even try to get laughs. What would be the point? He’s happy to set up gags and chuckle as his companion takes the jokes in wholly unexpected directions.”
Christopher Stevens, Daily Mail

“Education was the simplest of Steve McQueen’s Small Axe collection and possibly the most effective. McQueen evoked the look and feel of 1970s Britain with smoking headmasters and Roobarb on TV at teatime wonderfully. An eloquent and beautifully performed end to the anthology.”
Carol Midgley, The Times

“This capper to an extraordinary run of work is the definition of a small axe, making its point with a tidy economy and focused just on a single oak-felling at hand. I was often reminded of Alan Clarke’s work for television, with its rambunctious bleakness, its wicked black humour.”
Tim Robey, The Telegraph

“The last of McQueen’s Small Axe anthology, inspired by his own childhood, was a deeply affecting look at the way the school system was rigged against black children like him. The film was quietly devastating in its depiction of the shame and helplessness Kingsley felt as he realised he’d been marked out as a failure.”
Kasia Delgado, The i

“Kenyah Sandy was outstanding as Kingsley, a 12-year-old with a short attention span and a tendency to play the clown in his Seventies classroom. The drama was rightly furious that black children were written off, but lacked an equal anger that any child could be condemned to rot because of profound learning difficulties.”
Christopher Stevens, Daily Mail

“Imagine if Crossroads had been relocated to the south of France and the cast – Benny, Miss Diane and even Amy Turtle – replaced by impossibly beautiful women and men with abs so defined you could slice baguettes with them. Such is the Gallic hokum that is The Red Shadows. There are lots of funny moments, but not intentionally so. Like Line of Duty or Law and Order, it takes itself rather seriously. Happily, we don’t have to.”
Stuart Jeffries, The Guardian