“This enjoyable show could be one of the most therapeutic and relaxing on television.” 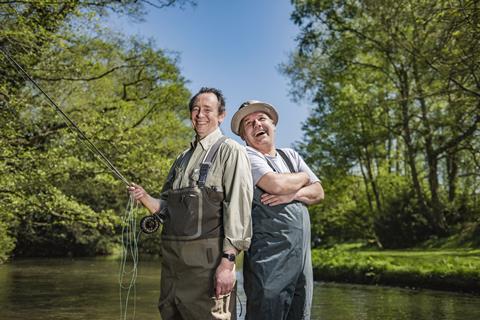 “Mortimer & Whitehouse: Gone Fishing sounded self-indulgent on paper. On screen, though, it was sheer delight. Men are notoriously terrible at opening up about their health problems, so this was a valuable piece of television that found a simple way into a difficult subject.”
Michael Hogan, The Telegraph

“There was something soothing and life-affirming in this embrace of the moment and the comfortable company of an old friend. A breath of fresh air, this enjoyable show could be one of the most therapeutic and relaxing on television.”
Elisa Bray, The i

“It will obviously invite parallels with The Trip, starring Steve Coogan and Rob Brydon, but this is underscored by the grave fact that Mortimer and Whitehouse could have popped their clogs. It wasn’t laugh-a-minute, but it was soothing, tender, the opposite of ‘blokey’.”
Carol Midgley, The Times

“It’s more ambling and shambling than The Trip. It doesn’t have the tension or the feeling that you are going deep into dark places in the protagonists’ souls … OK, so it’s not as good as The Trip. But then not much is. This is still lovely: warm and funny and human and healthy.”
Sam Wollaston, The Guardian

“Frankly, they could be catching sticklebacks in a jam-jar and this show would still be a gentle joy, as long as they keep up a stream of burble and badinage.”
Christopher Stevens, Daily Mail

Secrets of McDonald’s: 50 Years of the Big Mac, Channel 5

“It was marginally better than the recent Marks & Spencer one but only by the width of a French fry. It left me feeling like I’d just eaten a McDonald’s: ultimately unsatisfying and full of regret for indulging.”
Michael Hogan, The Telegraph

“There were interesting moments. Mostly, though, this was assembly line television … the TV equivalent of fast food.”
Christopher Stevens, Daily Mail

“There was much to chew on here, from the bad days of the big lawsuits to the new McDonald’s of the vegan wrap and the green tea smoothies. One secret was still not revealed though. Why does everything taste of cardboard?”
Matt Baylis, Daily Express

“Britain’s Refugee Children could have done with being double its length. This isn’t a criticism of the film-maker Ludo Graham, who produced a moving, straight-bat film, more an observation that it deserved a two-parter.”
Carol Midgley, The Times