“This enchanting series is a reminder that young orangutans are as inquisitive, emotional and lovable as human children.” 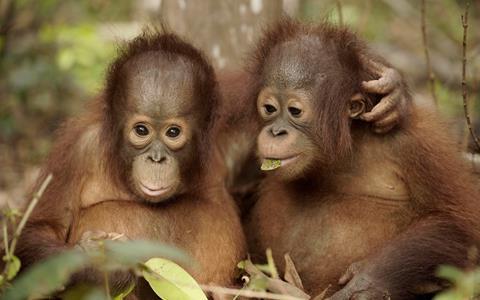 “Orangutan Jungle School is one of those documentaries that is failproof. By which I mean it cannot fail. Because it is simply not possible to look at a plastic laundry basket filled with baby orangutans in nappies, orphaned because scumbag poachers killed their mothers, hugging and kissing each other for comfort, then shrug and switch over to Britain’s Parking Hell.”
Carol Midgley, The Times

“Jungle School could have dwelt longer on issues such as deforestation and palm oil plantations, or the advances in technology that are helping to gain vital new information about the animals’ behaviour. Nevertheless, it was a fascinating insight into their world and heartening to see, despite humanity’s own reckless nature, the extraordinary bonds that they formed with the rescue staff.”
Rachel Ward, The Telegraph

“I learned little, and spent a lot of time watching not very much at all. The only memorable, original sequence, involved the youngest apes as they learned to climb trees and reach out for bananas that the staff dangled on long sticks. But if nothing else, this enchanting series is a reminder that young orangutans are as inquisitive, emotional and lovable as human children.”
Christopher Stevens, Daily Mail

“On the one hand there are moments of sheer, joyful brilliance, on the other watching it makes me feel, to borrow a phrase from Richard E Grant’s character, Leonard, ‘emotionally butt-f***ed’. It’s the fractious, jumpy, disjointed style that makes it a stressful watch and the fact that it is all done ‘online’ via a screen. This is the exact opposite of slow TV.”
Carol Midgley, The Times

“Stephen Mangan’s comedy Hang Ups continued at an unrelenting pace but remains very, very funny. Filmed hand-held with a split-screen and a heavy dose of improvisation from its raft of comedy stars, it has an almost sketch-like feel. Mangan and his co-writer Robert Delamere have carefully crafted an endless stream of comedy here.”
Rachel Ward, The Telegraph

“9-1-1 is an odd one. To be honest, I’m not sure whether I am meant to be sitting on the edge of my seat, biting my nails, or rolling around on the floor, laughing. And, in the end, I’m not really doing any of it. Or caring an awful lot.”
Sam Wollaston, The Guardian