“A beautifully judged documentary, it showed just the right amounts of light and shade and never became overly sentimental.” 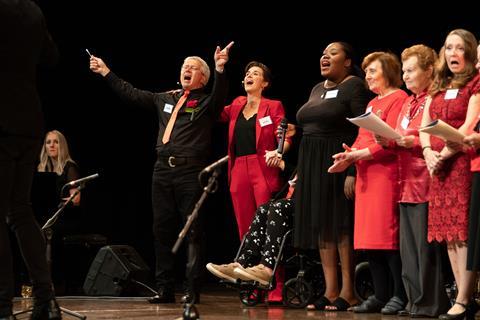 “Vicky McClure made an engaging and empathetic host, tenderly holding the hands of sufferers and carers while listening to their stories. There wasn’t a dry eye on the stage, in the audience or on my sofa. To witness the magical ways in which music helped these people was a privilege and pleasure.”
Michael Hogan, The Telegraph

“Even without Vicky McClure, this would have been standout television. But her personal chemistry with the members of the choir took it up a level and turned it into something more special. A beautifully judged documentary, it showed just the right amounts of light and shade and never became overly sentimental.”
Carol Midgley, The Times

“Choirmaster Mark De-Lisser did a magnificent job of coaxing a heartbreaking performance of The Beatles’ In My Life from his untrained singers. For anyone living with dementia, this programme was full of hope.”
Christopher Stevens, Daily Mail

“It has no fear of letting an art boffin talk at length in a foreign language, nor of ‘overloading’ the viewer with ‘too much information’, as many documentaries do now (sigh). It wasn’t the most absorbing episode I have seen from Great Art’s stable, but like them all it was wonderfully hypnotic and left me with the increasingly rare feeling that I’ve just been treated like a vaguely intelligent adult.”
Carol Midgley, The Times

“This series is unparalleled at showing us brutal tranches of reality. But the format is let down a little when the paramedics in the ambulance try too hard to entertain us. They’re saving lives – they don’t need to be stand-up comedians while they do it.”
Christopher Stevens, Daily Mail

“The choreography of Leiomy Maldonado and Danielle Polanco shone once again in the ballroom competition scenes. But Razzle-dazzle showmanship isn’t Pose’s only source of infectious joy. Watching the slow, still-unfolding process of these characters becoming more and more their true selves is as exhilarating as the opening bars of Cheryl Lynn’s Got to be Real.”
Ellen E Jones, The Guardian