Our Shirley Valentine Summer; Ramsay’s 24 Hours to Hell and Back; Prison

“More naked confessions, and fewer sham romances, would make this a much better format” 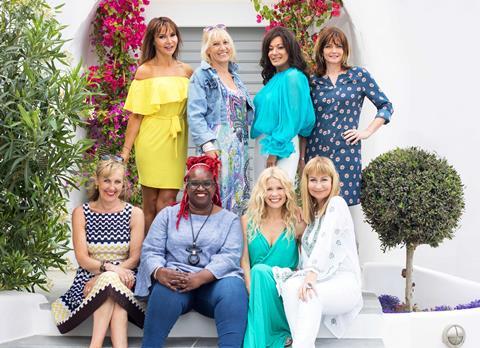 “It is worth seeing Our Shirley Valentine Summer for Nancy Dell’Olio, but the rest of it leaves the viewer with the feeling you get when you have agreed to look at somebody else’s holiday photos, only to find that there are 300 of them to get through.”
Rebecca Nicholson, The Guardian

“There’s something to be said for a show where you don’t feel the world’s goodness ebbing away with every in-it-to-win-it monologue or confession-room character assassination. But without any real competitive frisson – however grim, however idiotic – the programme had a tendency to meander from the al fresco lunches to the sunset rosés.”
Orlando Bird, the Telegraph

“The producers weren’t brave enough to leave the women together and watch from a distance. They had to stir the pot, by chucking eligible bachelors at them and pleading for results. That’s a pity, because when the women were allowed simply to talk and be honest, this show hit home hard. More naked confessions, and fewer sham romances, would make this a much better format.”
Christopher Stevens, Daily Mail

“Our Shirley Valentine Summer was preceded by and interrupted by so many careful reminders and disclaimers, pointing out the lack of links between this reality series and the 1989 film written by Willy Russell, that you wondered why they didn’t just come up with another title.”
Matt Baylis, Daily Express

Ramsay’s 24 Hours to Hell and Back, Channel 4

“Did he ask the diners to leave because it was a craphole and did they meekly do so? Yes! Did he do the impossible and turn it round in 24 hours? Yes! Did you get the sense that a lot of this was staged, with some people hamming it up for the cameras? Yes! It’s the same old formula. But somehow it works.”
Carol Midgley, The Times

“I don’t know this for certain, but I sensed rather too much manipulation. The idea of not only turning around a restaurant but also expecting a broken owner and a passionless chef to undergo Damascene conversions seemed a stretch too far in the space of 24 hours.”
Ben Lawrence, The Telegraph

“As alien as the practices, rituals and behaviour codes at HMP Durham might seem, it’s still very visibly a part of 21st century England and that creates a discomfort and a fascination that other films can’t match. Paddy Wivell’s films are led by characters rather than issues and the various warders and guests of Her Majesty were a rich wellspring of dry humour and irrepressible spirit.”
Matt Baylis, Daily Express

“It took bravery to make this film, when disgruntled drugs barons were threatening to have Wivell slashed or ‘swilled’ with boiling water. But it made for depressing viewing.”
Christopher Stevens, Daily Mail

“Here was a Hell to make Dante’s Inferno look milksoppish as overstretched staffers struggled to instil any sort of discipline in the inmates who adhered to their own anarchic code. This is what set Paddy Wivell’s documentary, happily free of editorialisation, apart: there was no hand-wringing about inherent goodness or prisoner potential. A bad apple, it seemed, was a bad apple.”
Ben Lawrence, The Telegraph