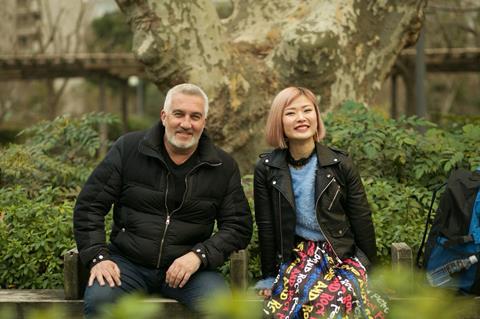 “Throughout this series Hollywood has seemed constantly astonished that Japan has such good food. Japan! Except that when he wasn’t raving about the food, he was calling it revolting. There was no middle ground. The wasabi and green tea Kit Kats were met with open disgust (“that’s horrible”), but this was just part of Hollywood’s newly unveiled irreverent side (which rather grated whenever his great head popped up in animations).”
James Jackson, The Times

“At every step of his journey, Paul has been surrounded by Japanese guides — comedians, chefs, wrestlers, YouTubers and even a cross-dressing heavy metal singer. He didn’t look at ease with any of them. The only person with whom he seemed to strike up a real friendship was his British cameraman, bantering with him and encouraging him to share the food. However much Paul protested he was in culinary heaven, he never lost the look of a man who was counting the minutes till he could go home.”
Christopher Stevens, The Daily Mail

“Summarising Unbreakable Kimmy Schmidt is a fool’s errand but the elasticity of the concept means that anything can happen. We rejoined Kimmy as she prepared to marry Prince Frederick, 12th in line to the British throne. This was all brain-teasing meta-fun, but it was disorientating because it made you lose all sense of where you were in the story, or how much running time was left. The writers signalled their satirical intent with some jibes about the Time’s Up movement, but they were too over-written to hit their mark. It was conceptually bold, then, and the cast was great, but only a partial success.”
Adam Sweeting, The i

“This is a first, a comedy offering in which you choose your adventure paths.  It’s up to you the viewer to help Kimmy to get to her wedding on time rather than start a robot war (I think). Because this is a very self-knowing sort of show, even the choice process becomes a source of comedy, with characters frozen with rictus smiles for an eternity as the option-process times out. All good, ingenious fun until the sheer endlessness of it all starts to feel like being trapped in a disturbing cheese dream.”
James Jackson, The Times

“This observational documentary, similar to Channel 4’s long-running favourite One Born Every Minute, was replete with human drama, captured with unobtrusive skill. There were flashes of humour along the way, while on-screen graphics showing text messages shared between loved ones added a warm flourish. The programme closed on a slow-motion montage of all the new parents leaving hospital, set to the strains of Cosmic Dancer by T-Rex (“I danced myself right out the womb”). It made for a euphoric ending to a highly emotive hour.”
Michael Hogan, The Telegraph

“In 2017, the former Rangers, Aberdeen and Leeds footballer Davie Robertson left Scotland to become the manager of Real Kashmir FC, a team in India’s second division. A TV documentary charted Robertson’s struggles. If either filmmaker Greg Clark or Robertson ever fretted about how much drama could be extracted from a second helping, those worries were quickly supplanted by bigger ones. On the day Robertson’s plane lands, the Indian government abolishes Kashmir’s devolved parliament and imposes direct rule.”
Tim Dowling, The Guardian

“Creaky game show I’ll Get This sounds as if it came from the “notes to self” on Alan Partridge’s dictaphone. A group of sort-of celebrities go to a restaurant for dinner and to play games, after which the loser pays entire bill. This all depends on whether you like the contestants and how much collective chemistry they generate. There are several problems with the concept. In order to cram in all the games, there’s no time to pay any attention to the food, so you have no idea whether the dinner is worth battling over. It’s not the finest hour for the BBC’s “Make Work for Needy Celebs” department.”
Adam Sweeting, The i

“We’re not in antebellum Atlanta, just the late 1990s, but the show misses no chance to point and cringe at clueless race relations from the era, such as Elena blithely assuming that Pearl “must have so much in common” with her daughter Lexi’s boyfriend, on the sole basis that both are black. The 1990s point-and-cringe game gets so obsessive that credible drama runs it a distant second. Ricki Lake’s on the box, everyone gossips about The Real World, and Mia’s appraised as having “a Denise from Cosby vibe”. Eye-rolling at the show’s cultural reference points might feel cheap, but there are whole scenes which achieve little else. And when trying to shade in the characters, it’s usually sketching with shortcuts.”
Tim Robey, The Telegraph