Play the game with kings of TV

Like Hollywood stars, controllers can demand ‘extras’ and get away with it, says Steven D Wright 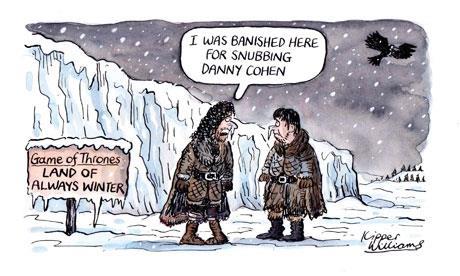 Sometimes when I do my daily search and skim of the TV industry news and gossip, I wonder if the headline writers really are in touch with what we telly types are actually talking about.

I mean, is anyone really bothered about reading Jeremy Hunt’s flirty emails to News International? Does anyone even care any more which latest grandee is being humbled at the Leveson inquiry? And the interminable hunt for the BBC’s new DG is hardly red hot gossip; it’s certainly not ‘trending’ for the twitterati…

No, the entire industry is still buzzing about The Voice, and that incredible moment a few weeks ago when Jessie J apparently ‘snubbed’ Danny Cohen, the controller of BBC1, when he went to say hello at her dressing room. Reportedly claiming to be ‘asleep’, she left him waiting outside and refused to see him.

Wow! Like a scene from Game Of Thrones come to life in suburban Shepherds Bush, this was a dread insult to an all-powerful king and should have resulted in an instant and brutal public beheading. Sadly, though, Danny is wiser and not as bloodthirsty as King Joffrey, and this rudeness appears to have passed without punishment (although, at the very least, it has led to a thousand BBC proposals being rewritten with Jessie’s name removed as presenter). But honestly Jessie – how stupid can you get?

It made me realise that some people still don’t understand the etiquette or get how one behaves in front of a controller (or even a choreographer, if one watches Smash, Spielberg’s brilliant guide to ‘how to be showbiz’ on Sky Atlantic). For all your talk of ‘it’s not about the money, money, money’ Jessie love, these people are gods sitting on large piles of gold. The rest of us are tiny ants and we should behave accordingly.

It is like those silly, naïve masseurs suing John Travolta for alleged saucy shenanigans at the spa. Don’t these people realise that, just like channel controllers, Hollywood stars can demand any ‘extras’ and get away with it, including revealing their bare bum to a frightened massage therapist (for clarity, I should point out this is Travolta’s bare bum I am talking about, not Danny Cohen’s, although I would, of course, be perfectly willing to rub his if he wants me to at our next briefing on the sixth floor – and will now make a note to pack some baby oil and scented candles along with my proposals for a follow-up seriesto Countryfile).

Like the Queen thinking everywhere smells of new paint, channel controllers live in a wonderful fairytale world where they only ever hear the best ideas and see the brightest smiles, and their every utterance is echoed by gales of sycophantic laughter.

Stuart Murphy once told me that after he left BBC3, he was shocked at how unfunny he had become – as no one laughed at his gags now he was working at an indie. Of course, now that he is controller of everything at Sky, I have no doubt he is hilarious once again. For clarity and being entirely impartial, I should point out I still think Stuart is the best looking, cleverest and funniest controller ever… er… except for Peter Fincham, Danny Cohen, Zai Bennett and Richard Klein, of course.