Bundesliga has added another two Match Facts graphics to its matches, furthering its partnership with AWS.

Both pieces of insight will debut on 4 March in the Arminia Bielefeld versus FC Augsburg match.

Set Piece Threat provides new perspective on a team’s scoring ability from plays such as free kicks and corner kicks, while Skill compares Bundesliga players to visualise the skills they bring to their teams and positions.

The two new insights increase the Bundesliga Match Facts powered by AWS to 10 stats (the others are Most Pressed Player, Attacking Zones, Average Positions – Trends, Shot Efficiency, Passing Profile, Speed Alert, Average Positions, and xGoals). All are aimed at helping audiences better understand goal probability and the strategy involved in decision-making on the pitch.

The league generates the Match Facts by gathering and analysing data from live game camera feeds as they’re streamed into AWS.

Machine learning means AWS is able to further train the algorithms used to create the on-screen graphics during broadcasts and in the official Bundesliga app. 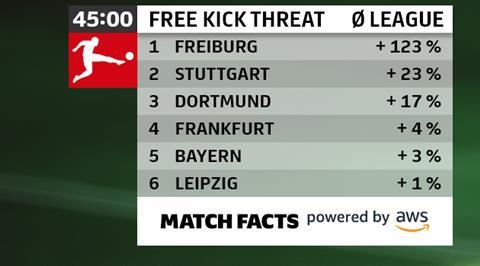 In modern football, teams score more than a quarter of all goals from set pieces like free kicks and corner kicks. Until now, fans had no reliable way of assessing the threat a team poses from different types of set pieces. Set Piece Threat quantifies a team’s threat by comparing the team to the league average to show how much of a threat a team is with their set pieces. During live broadcast games, video editors can use Set Piece Threat ahead of free kicks and corners to show how much more danger exists in the current matchup compared to the league average or whenever match commentators want to talk about set pieces and the related strength of a team. 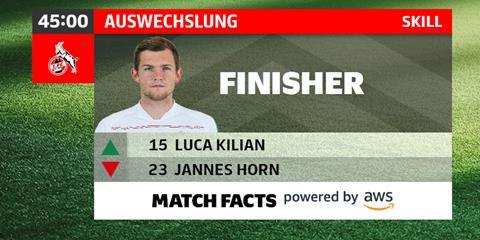 In addition to their fundamental talent, every player in the Bundesliga brings some specialised skills to the game that complement those of their fellow players and make their team stronger. The new Skill Match Fact combines and compares the cumulative stats of every Bundesliga player to assess their skills across different categories. The stat features four player profiles: a ‘Finisher’ who excels at scoring goals—in terms of number and efficiency; a ‘Sprinter’ who generates high maximum speed on regular players and does that more often than other players; an ‘Initiator’ who accumulates, assists, and second assists, consisting of a high number of difficult passes that lead to assists; and a ‘Ball Winner’ who is able to create a lot of turnovers from the opposing team by winning the ball in an aerial or ground duel or intercepting an opponent’s pass. Bundesliga ranks each skill by combining several metrics into one score. If a player ranks in the league-wide Top 10 for a given skill, Bundesliga will highlight this player in the live broadcast or in the Bundesliga app when substitutions are shown.

Andreas Heyden, executive vice president of digital innovations for DFL Deutsche Fußball Liga, said: “We created the Bundesliga Match Facts powered by AWS to enrich the match experience for millions of fans worldwide, with real-time insights that deepen the viewer’s knowledge and appreciation of the sport and player actions. We’re adding a whole new dimension to the sport, with innovative in-game perspectives that give context on game strategy to help redefine how the world watches football.”

Klaus Buerg, general manager for AWS Germany, Austria, and Switzerland, Amazon Web Services, added: “Bundesliga fans love their teams and immerse themselves in every detail of the play on the field. That’s why AWS and Bundesliga are always collaborating on new ways to deliver meaningful insights to fans and teams worldwide to create unique viewing experiences and provide clubs with essential player and team data that can help them improve performance. We’re proud to help Bundesliga differentiate itself among football leagues through advanced analytics, and we look forward to continuously improving the way fans experience sporting events.”