“A wholly unedifying hour that can have helped no one except, perhaps, Morgan and a psychopath.” 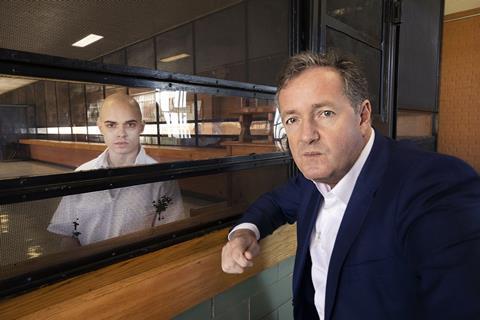 “As with the recent Netflix documentary Conversations With a Killer: The Ted Bundy Tapes, it simply fed base appetites and added to the wretched mystique that somehow continues to attend terrible crimes and criminals without adding any benefit by way of insight or analysis. A wholly unedifying hour that can have helped no one except, perhaps, Morgan and a psychopath.”
Lucy Mangan, The Guardian

“This documentary differed from the prolonged, often prurient gawps at murderers that television often serves up. Morgan may pick Twitter fights, but here he took a restrained, clinical approach, interviewing Bennett from behind reinforced glass, quietly wrong-footing him by asking simple questions. This was a thoughtful chess game of an interview, the tone intermittently lowered by those two experts listening in on headphones; their contributions often felt gauche and gleeful.”
Carol Midgley, The Times

“This felt like a game, a rigged one, in which Morgan’s tough, probing interview had been rendered valueless by persistent narrative intervention. This determination to view its subject through spectacles with ‘psychopath’ scratched on both lenses turned a fascinating interview into disappointingly bad TV, clumsy and voyeuristic, done for effect.”
Chris Harvey, The Telegraph

“It is unclear what exactly the interview was meant to achieve – it offers no catharsis, and very little understanding of Bennett’s condition. Psychopath with Piers Morgan manages to find easy answers only because it refuses to pose difficult questions. For actual insight into the psychopathic mind, you might even be better off watching Hannibal.”
Louis Chilton, The i

“The only fault with the film was its brevity. An hour was not long enough for any interviewer, even one as efficient as Piers, to take a can opener to Bennett’s shabby shell.”
Christopher Stevens, Daily Mail

“The ability to switch from tragedy to comedy, from poignancy to absurdity, with equal credibility is the triumph of this adaptation. Yes, the Major Major Major thing went on too long, as did the hospital scene with the plaster-cast man, but you can smell and feel this war and the dialogue is classy.”
Carol Midgley, The Times

“In the circumstances, it’s probably better to judge Catch-22 on its merits as a drama – and it continues to impress, even if it is clearly having a few difficulties translating the novel’s sensibilities, noticeably in its more sentimental response to airmen deaths.”
Chris Harvey, The Telegraph