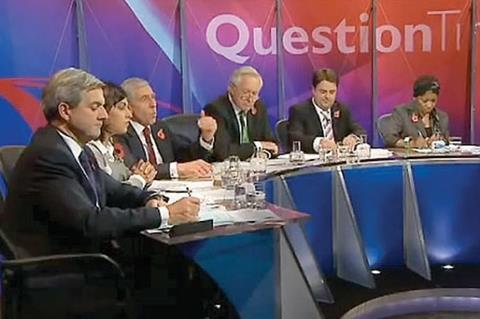 Until now, the corporation has refused to release detailed iPlayer usage figures to the press, but it has now published detailed information about the most requested programmes and viewing trends.

In October, there were around 928,000 requests for the controversial episode – nearly 50% more than its nearest rival, the first instalment of Life, which drew 664,000 requests. The boost helped the iPlayer to its best ever monthly performance, with 79.3m requests, and helped pull in 5.8m users in a week – the highest for any week since the catch up service launched. It also brings the total number of views for the Nick Griffin episode of Question Time to 9.4m.

Panel and comedy shows like also performed well. Three different episodes of Never Mind the Buzzcocks made it into the top 20 most requested programmes (see below) alongside the first episode of Russell Howard’s Good News, Michael McIntyre’s Comedy Roadshow and Mock the Week.

The bottom of the top 20 list was dominated by EastEnders and Strictly Come Dancing, although one episode of EastEnders ranked seventh. Merlin also made two appearances in the list for its third and fourth episodes.

Figures for radio requests on iPlayer were much lower, dominated by BBC Radio 4’s The News Quiz and Radio 1’s The Chris Moyles Show. Just one programme made it into six figures: 5 Live’s coverage of the Ukraine v England World Cup qualifier on 10 October, which was not shown live on terrestrial television.

Usage patterns were also very different for television and radio, according to the BBC research. iPlayer viewing followed roughly the same sort of curve as television viewing in October, peaking at just after 9pm with 155,000 users. Radio requests fluctuated throughout the day until around 8pm when they started to trail off. The peak was around 11am with 35,000 requests – three hours after the 8am peak for radio listening.