“Nobody uttered the word ’journey’, thankfully, but that was the format of this half-hour race to enlightenment” 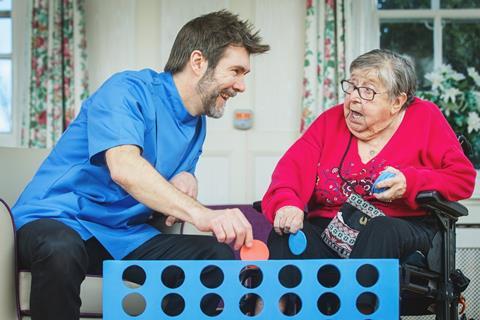 “Gilbert has found the right tone for a show like this: self-mockery but with a generosity of spirit. Sometimes a programme passes you by. It turns out there have been eight previous series. I have no idea how well he fared as a miner, wedding planner or RAF fighter pilot, but it turns out he’s pretty great at being a carer.”
Anita Singh, The Telegraph

“Yes, there was lots of gallows jollity, but it was well judged. Gilbert, crucially, is a sensitive soul behind self-deprecating bravado and made sure that his journey was illuminating as well as entertaining. Nobody uttered the word “journey”, thankfully, but that was the format of this half-hour race to enlightenment: from fearful incompetence to semi-competence laced with serious admiration for those who get on and do it all year long despite underfunding and ingratitude.”
Dominic Maxwell, The Times

“Gilbert’s arch tone and jokes about bottoms were jarring, even a little patronising, given the current circumstances. Gilbert was much better when interacting with the elderly or vulnerable people in his care. Gilbert treated everyone like old chums, rather than patients. So much better than endless tears and pity. In a funny sort of way, Gilbert’s initial laissez-faire approach to some of the practical elements of the job actually underlined what this programme was trying to say. Yes, being a carer involves some wiping of bottoms, but it is really about human connection.”
Rupert Hawksley, The i

“Rhod’s been a tattooist, a binman, a butler, a zoo keeper, a male model and everything in between. But his quick wit was outgunned on all sides at the Cardiff care home where he was helping to look after the residents.”
Christopher Stevens, Daily Mail

“Here an assortment of medics (and one chief executive) at various hospitals in departments directly or indirectly affected by Covid-19 film themselves, talking directly to their smartphones about it in real time. It’s as compelling as you would expect. Special mention must be made to the editing team, whose ability to build a coherent narrative and well-paced piece from disparate sources is needed more than ever. The acuteness and particularity of the stresses frontline medical staff face are brought vividly home.”
Lucy Mangan, The Guardian

“Sometimes the simplest ideas are the strongest. The testimonies that made up this hour-long documentary and explained the reality of this crisis in a clear, powerful way. It was an emotional film. Of all the programming about the crisis, the endless news reports, this was the one that cut through. Two themes soon became apparent. One was the responsibility they felt for patients dying alone. The other message was that these workers are risking their own lives, and that fear weighs heavily on them.”
Anita Singh, The Telegraph

“It traded in fascinating or awful details. It was hard work sometimes. The sheer number of diarists made it a slightly disjointed trek from one undeniably important concern to the next. Even so, it felt like vital viewing.”
Dominic Maxwell, The Times

“This was dull, dull, dull. It was quite literally us watching a Zoom conversation we were not invited to be a part of. There was no theme that related all these stories but by gluing these fragments together, Dooley did manage to present a (very grainy) picture of a population that remains determined to overcome this crisis. Reassuring message. Forgettable television.”
Rupert Hawksley, The i