Richard Taylor, the former managing director of Quantel and one of the industry’s most influential engineers, has died. 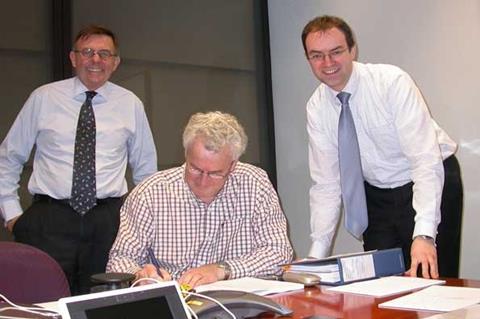 Taylor had been ill for a short time with cancer and was being cared for by a Sue Ryder care home in Nettlebed at the time of his passing on Friday 26 June 2009.  He was 64.

Taylor will be remembered for the role he played in establishing Quantel as an influential force within the broadcast industry and for aiding the introduction of a host of innovative non-linear graphics and editing systems.

Along with a group of colleagues from EMI Research Laboratories he joined Quantel Ltd in 1975.

During more than 30 years at the Newbury-based manufacturer he was involved in the development of, amongst other things, the world’s first practical electronic graphics system, Paintbox, in 1981 and the revolutionary Harry effects compositing system/non-linear editor in 1985.

Taylor also led a management buyout of the company in 2000 that saw Quantel return to private ownership from Carlton Communications for a fee of £51m.

He resigned as chairman and chief executive in 2005.

During his career he received countless awards including an OBE for services to export and a Fellowship of the Royal Television Society.

Paul Kellar, Taylor’s long-term director of research and close friend said: “With his special combination of skills – engineering, marketing, creative, commercial and , by no means least, leadership – coupled with a razor-sharp mind, natural integrity and determination, Richard created a unique enterprise which is still a source of great pride.”

For more eulogies see below.

A funeral will be held at 12.45 on Thursday 2 July, at The West Berks Crematorium, Bath Road, Thatcham, Berks RG18 3HJ.

Donations to The Sue Ryder Care Home, Nettlebed, may be made directly or through Camp Hopsons, Funeral Directors

“Richard inspired me with his enthusiasm, dedication and raw engineering talent. His ability to lead the teams that turned “impossible” engineering concepts into real commercial products time and time again, had to be observed to be believed. I have lost someone I respected immensely, and the industry has lost a true entrepreneur.”

“RJT was a larger than life person, in many ways. Tall, with a powerful presence and immaculate sense of dress, he was nonetheless actually very shy, and sometimes seemed to find it difficult to engage in open dialogue when the aims of the discussion were less than obvious. Combined with a personality that didn’t suffer fools gladly it could make Richard an interesting person to deal with. This is something I know well, as I’ve a similar personality, if being a bit more scruffy in appearance.

“But Richard introduced me into the world of digital imaging, and he is probably the person most responsible for who I have become. Not sure he’d be proud of that exactly, but I am very proud to have known Richard, and to have been involved in this industry with him during its most formative years. His presence will be missed.”

“Richard had a wonderful way of looking at problems and opportunities from a completely ‘other’ place. This, and his infectious enthusiasm and ability to draw out original ideas from others around him, was the genesis of the highly original thinking that fuelled Quantel. Richard also had the determination and belief to inspire his team to see those ideas through – often in the face of industry reactions such as ‘why on earth would you want to do that?’ He knew exactly why and was proved right time and again.

“Behind the confident business exterior was an intensely private and thoughtful man who cared deeply about the people around him; many of us have good reasons to be very grateful to Richard for his humanity. He was a great man, and he was also a very fine human being – a rare combination, and he will be sorely missed.”

[The picture shows Taylor signing his Expert Report in his last professional project, where he acted for Herbert Smith and Markem as defendants in a major Patent case. (Image courtesy of Paul Kellar).]