Rio and Kate: Becoming a Stepfamily; The End; Inside No. 9 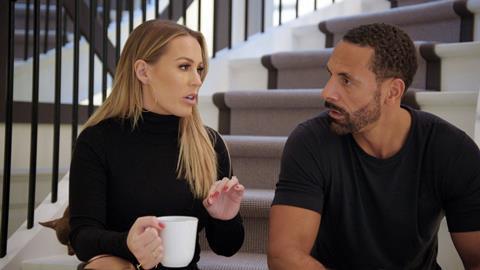 “Documentaries set in footballers’ homes are usually blingy, boastful and tediously banter-heavy. Rio Ferdinand delivered the precise opposite. It would take a true cynic not to see the value in publicising those child bereavement services. The therapy room scenes — featuring various children— were a privilege to watch.”
Carol Midgley, The Times

“The former England defender isn’t an especially articulate man: there’s a lot of ‘know what I mean’ and ‘yeah, sort of, innit’. But he is remarkably open, with an unusual ability to intuit what people close to him are feeling. Grief has given him a deep insight into his emotions: not the superficial TV type, all hugs and invisible tears, but the real wellsprings.”
Christopher Stevens, Daily Mail

“The most affecting part of the film, and possibly the most useful to families in a similar position, saw the children attend group bereavement therapy.”
Anita Singh, The Telegraph

“The End is hard to categorise. I suppose it is technically a comedy drama, but that makes it sound more entertaining than it is. Edie’s horror at her new surroundings were amusing, but the rest is bleak. This made for an uneven watch. There is a reason why no one has attempted to meld The Golden Girls with Samuel Beckett.”
Anita Singh, The Telegraph

“I can’t remember when I last saw a more memorable start and finish to an episode of drama than in The End. Both scenes were unapologetically bleak, but outstanding. We are overdue a series that confronts death and suicide so honestly, brutally yet with an inspired light touch.”
Carol Midgley, The Times

“I have thought a lot about The End and I still have no idea what it hopes to achieve. The problem, in the opening episode at least, was that the jokes were never quite bold enough, so they cheapened a series of otherwise quite affecting stories. If you’re going to laugh at suicide, you really have to go for the jugular.”
Rupert Hawksley, The i

“The End is a meditation on what makes life worth living and how much of it is within our control. Edie is probably a natural termagant who would never have been the life and soul of the party, but her story invites us to think about how events cannot help but shape us.”
Lucy Mangan, The Guardian

“Those who didn’t watch Psychoville would have been left scratching their heads; fans will have cheered from their sofas. This was Radiohead striding out at Glastonbury and playing nothing but their B-sides.”
Chris Bennion, The Telegraph