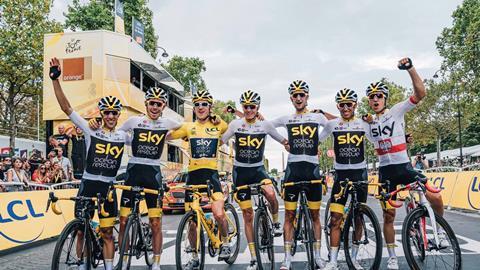 Sky is calling time on its involvement in cycling after a decade following its acquisition by Comcast.

The broadcaster will withdraw its support for Team Sky at the end of 2019, having notched up 322 wins, including six Tour de France victories led by cyclists including Bradley Wiggins, Chris Froome and Geraint Thomas.

The team will continue to race under a different name from 2020, if a suitable backer can be found.

Sky’s retreat coincides with the £30bn takeover of the business by US cable giant Comcast, which was characterised as a ‘new phase’ in its development.

Former owner 21st Century Fox, which owns minority stake in Team Sky, will also wind down its involvement with the sport.

Sky’s support for cycling got underway in 2008 when it joined forces with British Cycling to increase participation and support elite success. Team Sky was launched in 2010.

The commitment formed part of Sky’s Bigger Picture initiative, a corporate responsibility scheme that includes Sky Ocean Rescue and a partnership with the ECB to encourage children to play cricket.

Sky group chief executive Jeremy Darroch said it was the right time for the business to focus on its new initiatives.

“I’d like to pay a special tribute to Dave Brailsford and the immensely talented team of riders and staff he has assembled at Team Sky,” he said. “What they have achieved together would have been beyond the dreams of many just a few years ago.”

Team Sky principal Brailsford said: “While Sky will be moving on at the end of next year, the team is open minded about the future and the potential of working with a new partner, should the right opportunity present itself.”