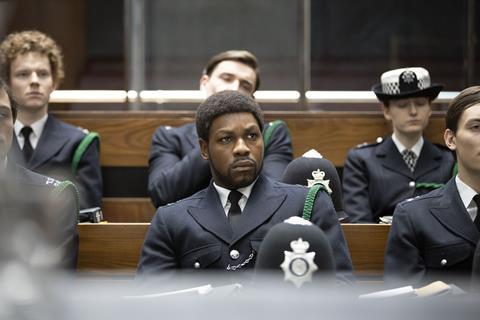 “John Boyega was variously required to show anger, tenderness, hurt, inscrutability, brooding intensity and utter door-kicking fury, and he did it all with equal conviction. He was present in virtually every scene, commanding and credible even when forced to do one of those awful ‘man runs furiously while shouting’ sequences that dramas love so much to show a character working out his frustration via exercise. The real Logan must be pleased with the treatment of his story in a script that was neither sensationalist nor clichéd.”
Carol Midgley, The Times

“Logan’s strength of character was powerfully conveyed by the actor who played him, John Boyega, even in the silent moments when he contemplated whether to carry on. Every glance and gesture carried weight. The actor has admitted that he fears his support for Black Lives Matter could damage his career, but his is a talent too great to ignore.”
Anita Singh, The Telegraph

“Of the three Small Axe films that have aired so far in Steve McQueen’s anthology series, last night’s Red, White and Blue is perhaps the one that speaks most poignantly to the modern day. Throughout, Logan maintained an officer’s requisite composure, which made his moments of frustrated rage, when they came, all the more visceral – and called to mind Boyega’s own powerful speech at a Black Lives Matter protest in Hyde Park this summer.”
Emily Baker, The i

“Red, White And Blue told the story of Leroy Logan, a young black science graduate who decided to join the force at the start of the Eighties. And that is all it did. There was no sub-plot, no depth to any other characters and no proper ending. John Boyega, an effortlessly charismatic actor, was great in the central role, but everyone around him was a cardboard cut-out. There were a few good scenes — some filmed with flamboyant technical skill, such as the pursuit of a violent thief across a factory floor. But this cinematic drama lacked the urgency needed for TV.”
Christopher Stevens, Daily Mail

“Anyone with motion sickness, or taste, should have avoided Michael McIntyre’s stomach-churning new Saturday night series, The Wheel. There were various nonsensical complications to the structure of the game, including dry ice, an irritating theme song and a confusing light system, all of it tedious and protracted, with only eight questions posed over the course of an hour and none of them exactly rocket science. It was neither original, nor challenging, nor entertaining.”
Emily Baker, The i

“Michael McIntyre’s new Saturday night spectacular The Wheel looks like it was designed to be packaged with a gameboard and spinning plastic chairs, and sold in John Lewis for £24.99. It is the sort of convoluted contraption that is guaranteed to be busted by the end of Boxing Day — which is not long enough to get to grips with the needlessly over-complicated rules.”
Christopher Stevens, Daily Mail

“This is not a critical or particularly balanced take on Digga’s story, but it is revelatory, particularly for people who may not be familiar with the still relatively underground music genre drill. The documentary has already caused some debate, with accusations that it glorifies knife crime. I don’t think that is a reasonable claim, but neither does it do much to show the devastation. Its approach is resistant to easy questions and easy answers. It frequently argues that it is complicated; on the evidence displayed here, it is.”
Rebecca Nicholson, The Guardian