Snackmasters; The Capture; Defending The Guilty

“It’s a neat twist on BBC2’s Inside The Factory format.” 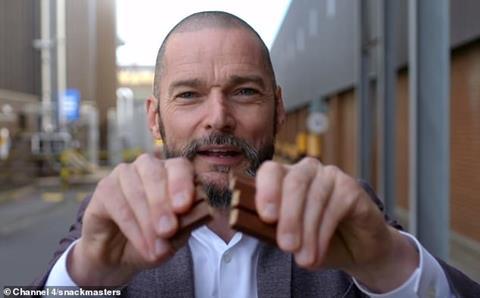 “For three quarters of an hour this high-concept synthesis of Inside the Factory and Great British Menu burbled along along as a just-fun-enough bit of mad science as two chefs battled to create a better replica of the KitKat. But then, the climax – the KitKat experts’ blind tasting of Singh’s and Clifford’s efforts, and suddenly, ridiculously, it was gripping. For a show that made no disguise of its ridiculousness – and given that it meant precisely nothing who won — earning such tension was quite an accomplishment.”
James Jackson, The Times

“It’s a neat twist on BBC2’s Inside The Factory format. In their Michelin-starred kitchens, Daniel Clifford and Vivek Singh were left to puzzle out the right blend of wafer and milk chocolate, without any clues to the recipe. This proved to be an engaging way to teach us about the production process.”
Christopher Stevens, Daily Mail

“Host Fred Sirieix is doing the hard prime-time yards now, leading from the front, burdened with making a derivative factertainment format work. Our Fred’s main problem is the one at the heart of any contrived reality contest, which is whether anyone at home could give a fig about the outcome. Sirieix tries to square that circle by going for macho hype so enthusiastic that you hope it is flavoured with irony.”
Jack Seale, The Guardian

“Convoluted is fine in a conspiracy drama (see John le Carré), but convoluted conducted at a breakneck pace is a bit like downing a pint of eels. Nonetheless, it says much about Ben Chanan’s writing that his pacey surveillance thriller won’t just have viewers just on board as it heads into its finale, but intrigued by the big questions it poses.”
James Jackson, The Times

“Kudos to writer/director Ben Chanan for so skilfully playing on fears of a globalised secret state. The Capture presents a cold, hostile world where technology records our every movement, and events can be ‘corrected’ into any shape the hidden watchers desire. It also asks how far it’s reasonable to go to fight back, and if doing a little bit of bad might serve a greater good. It’s thought-provoking stuff.”
Adam Sweeting, The i

“The fate of the inept, self-obsessed barristers and their lowlife clients didn’t seem to matter much when the six-part comedy Defending The Guilty started a couple of weeks ago. But after three episodes, a more compelling story has started to take shape. Although some of the incidents do feel too closely cribbed from real life, it is all shaping up to be much better than it originally seemed.”
Christopher Stevens, Daily Mail