Sony has developed a camera system for shooting stereoscopic 3D content that requires just a single lens to capture the left and right eyes. 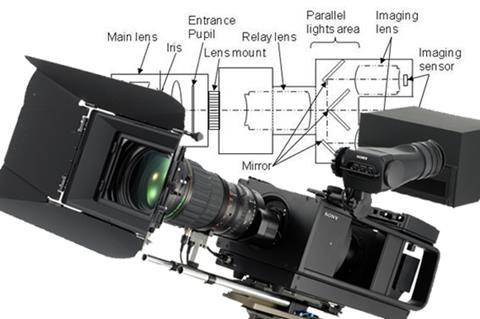 While most current 3D rigs require two lenses, this new innovation is designed to record “natural and smooth 3D images of fast-moving subject matter”, by using just one lens that feeds into two sensors via offset mirrors that reflect light to each sensor.

According to Sony the new camera will shoot up to 240 frames per second, making it ideal for sports coverage.

A prototype version will be demoed in Japan next week (6 October) at CEATEC 2009.

Sony insists the potential benefits of the new system could be manifold. In a statement it said:

“In existing half mirror 3D camera systems with separate lenses for the left and right eyes, the parallax range is adjustable, enabling the depth of the 3D images to be modified.

“However, when operating the zoom and focus functions of such systems, the sensitivity of the human eye, in particular to differences in the size and rotational movement of dual images, as well as any vertical misalignment or difference in image quality has meant that complex technology has been required to ensure that each camera lens is closely coordinated, and there are no discrepancies in the optical axis, image size, and focus.

“The introduction of a single lens system resolves any issues that may occur as a result of having different optical characteristics for each eye.”

By using mirrors in place of shutters, incoming light will be simultaneously separated into left and right images and recorded as it reaches the parallel light area (the area where diverging light from the point of focus on the subject matter becomes parallel) of the relay lens.

A further benefit of this system is that when polarized glasses are not used, viewers will still be able to see natural 2D images, as the disparity of the images for left and right eyes are within the range that human eyes can recognize as a blur.