Squeamish About …; Red Dwarf: The First Three Million Years; My Name is Kwame; The Deceived

“It is fun and harmless and, at 15 minutes long each time, does not outstay its welcome” 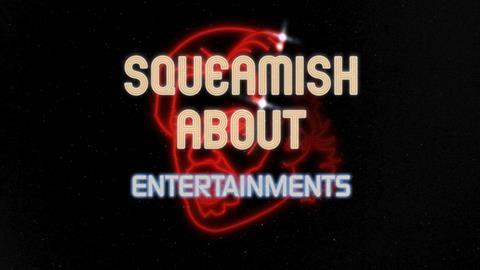 “Despite the best efforts of writer Arthur Mathews (co-creator of Father Ted), it’s not possible to maintain side-splitters for a full quarter of an hour. There were some good lines though. Gracie Fields, enjoying a knees-up, was described as ‘the famous drag act from Rochdale — you have to say that’s a pretty convincing woman’. Well, quite.”
Christopher Stevens, Daily Mail

“It is fun and harmless and, at 15 minutes long each time, does not outstay its welcome. And Entertainments, at least, ends on a gently thoughtful note. Over footage of closed theatres and stadiums emptied by the pandemic, Squeamish announces: “2020 saw British entertainment draw to a close.” As the recent footage gave way to a documentary reenactment of hooded peasants gathered round a campfire, he continued: “Like our ancestors, we are now content to amuse ourselves by sitting in the dark and telling stories about angry, vengeful gods.” We were played out to footage of a crowded Trafalgar Square and the sound of Don McLean singing American Pie – “and this will be the day that I die.” You have to laugh.”
Lucy Mangan, The Guardian

“Are we entering the age of the 15-minute comedy? David Tennant and Michael Sheen did it in Staged, noodling away on Zoom. Diane Morgan is about to do it with Mandy, which starts next week. It’s a win for the viewer because if it’s funny you’re left wanting more, and if it’s not, well, you’ve only wasted a quarter of an hour.”
Anita Singh, Telegraph

“As the recent feature-length special proved, it’s funnier than ever. That’s the real significance of this three-part documentary celebration of the series. Its details were sometimes interesting — for instance, the discovery that John-Jules based the Cat’s walk and screeches on Godfather of Soul James Brown. But what matters is the endless determination and self-belief of the writers. Anyone wanting encouragement for their own dreams will find it here.”
Christopher Stevens, Daily Mail

Imagine: My Name is Kwame, BBC1

“In his earlier life he had only wanted to be the next Lionel Richie. We heard some of his recorded songs: not a bad voice. At the age of 24 he realised, as so many hopefuls do, that it wasn’t going to happen. If this documentary showed us anything, though, it is that he exudes positivity, a “can-do” person. He turned his hand to acting and soon became paramedic Finlay, a long-running character in Casualty. Once, when working in the US, he took his actors out on the streets during the riots in Baltimore to sing Bob Marley songs. “He brings joy with him wherever he goes,” a colleague said.”
Carol Midgley, The Times

“The finale got very silly, but what can I say? I enjoyed it.”
Carol Midgley, The Times