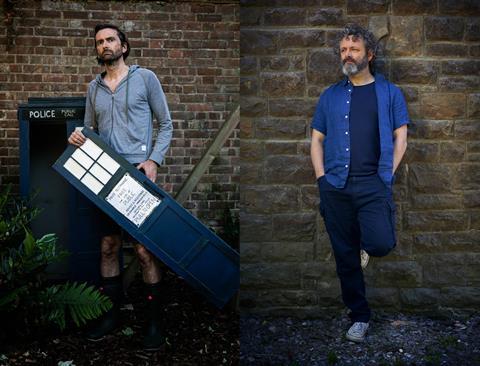 “It’s all a bit meta, but that’s the joy of it. It depends on you knowing that Tennant and Sheen are friends in real life, so that you can fully enjoy the (one presumes) unscripted banter between them, particularly before and after the credits but also dotted through the “real” story of director Simon attempting to persuade them to rehearse a play for the West End despite being furloughed. The story itself is slight. Sheen doesn’t really want to do the play – Pirandello’s Six Characters in Search of an Author, chosen I presume for its resonant absurdism and metafictional premise – while another actor champs at the bit offscreen to take part. It’s a light, charming offering.”
Lucy Mangan, The Guardian

“The best thing about Staged is that it only lasts 15 minutes. The format largely consists of two actors having meetings over Zoom, and anyone who has been forced to conduct work business in this way will know that around the quarter-of-an-hour mark you find yourself silently begging for the sweet release of death. Why do actors love playing versions of themselves? It can be funny, and here it frequently is. Both are going slowly mad with lockdown boredom. Tennant and Sheen have decent chemistry, playing friends who are itchily competitive. Tennant has the better deal, cast as the less pretentious one. Forty minutes of this would have been excruciating. Even 15 feels too long, but I don’t know if that’s because lockdown has ruined my attention span or if the show is a bit too thespy for its own good.”
Anita Singh, The Telegraph

“It did sometimes drift into self-indulgence and on occasion the self-congratulation did not feel entirely faux. However, it was a good idea, two furloughed celebrated actors becoming increasingly angsty and hairy. The reason it worked was that Sheen and Tennant seem genuine, likeable men who don’t take themselves too seriously.”
Carol Midgley, The Times

“At long last! It has taken 10 weeks and quite a few misfires but finally we have some compelling “lockdown” television (by which, of course, I mean television created via Zoom). Staged will inevitably be compared to The Trip. But I think Staged might just have the edge. There is none of the smugness that occasionally makes The Trip a bit nauseating. Tennant and Sheen are more generous performers, willing to play the supporting role. And on the most basic level, it was a thrill to see these two great actors – bearded (Sheen), barefoot (Tennant) – just hanging out in their own homes.”
Rupert Hawksley, The i

“The grainy, low-res footage of Staged looks as though it was filmed for loose change. But there’s a spontaneity, an unspoken sense of shared fun in their dialogue as they chat via laptop and video phone apps. The sharpness of the script and the skill of the actors makes us feel as if we are eavesdropping on the affectionate bickering of two fed-up friends. It’s a joy.”
Christopher Stevens, The Daily Mail

“If you like your detective drama served with lashings of twee, chocolate-box kitsch, a few lumps of slapstick and no menace at all, then you will cheer the return of Agatha Raisin. This is basically a cartoon performed by flesh and blood adults, where people eat Jammie Dodgers and re-enact battles called “Titley’s Knob”. It’s also harmless comfort-blanket nonsense that uses a lovely colour palette and there’s nothing wrong with that, even if it did last about two hours — which was one hour too long.”
Carol Midgley, The Times

“We’re now into series three of Agatha Raisin but this comedy, based on MC Beaton’s much-loved mystery novels, still works nicely. My only gripe is that, at two hours, this episode stretched the joke to breaking point. Because it’s so silly there is none of the suspense of, say, Jonathan Creek to cut through the farce.”
Rupert Hawksley, The i