State of the Union; Treasure Island with Bear Grylls 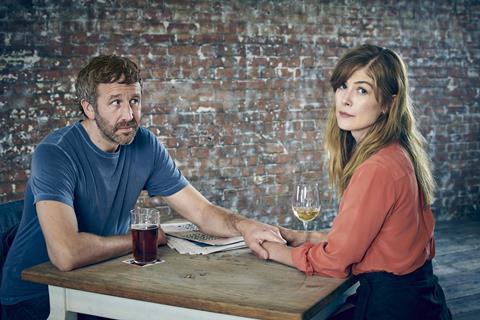 State of the Union, BBC2

“Every aspect, every frame, every word, every beat is a perfectly considered, crafted and curated thing that creates something even greater than the sum of its parts. It is as honest and multi-faceted an examination and appreciation of marriage as you could hope to find (as well as an astonishingly cliche-free one).”
Lucy Mangan, The Guardian

“On paper, taking a taut, claustrophobic, slice-of-life look at a marriage in crisis may not sound like a barrel of laughs. But as scripted by Nick Hornby, directed by Stephen Frears and performed by Rosamund Pike and Chris O’Dowd, State of the Union is a drily funny, perceptive dissection of a disintegrating relationship.”
Jeff Robson, The i

“The fare was rich, fortified by the talents of Chris O’Dowd and Rosamund Pike. However, a weak spot for me was that they seemed incompatible as a couple and he wasn’t recriminatory enough.”
Carol Midgley, The Times

“Initially Nick Hornby’s dialogue felt stagey, which jarred in what was meant to be a realistic mise en scene. Funny, yes, but not for a moment did you believe they were a real couple with real-world problems, or indeed any problems at all. It may just have been a lack of familiarity, because episode two was much better.”
Benji Wilson, The Telegraph

“Whoever devised the premise for Treasure Island with Bear Grylls is packing some evil genius. It is an essay on how money corrupts and divides. When Lord Ivar Mountbatten (yes, really) and Marco the buff Marine found the first £15,000, then another £20,000, greed put its boots on. You could practically see it enter their bodies like the Devil in The Exorcist.”
Carol Midgley, The Times

“It’s obvious that the presenter hates the new twist. He longs for the purity of man against the elements, awakening old hunter-gatherer instincts and building a tribe. But who cares about all that fake philosophy stuff when there’s a bundle of tenners deep in the mangrove swamp?”
Christopher Stevens, Daily Mail

“Lord Ivar Mountbatten stole the show on Treasure Island with Bear Grylls. It’s just a shame the programme itself was such a dud. It was watchable enough on autopilot but, despite the tropical setting, also strangely dispiriting. The climate and money seemed to bring out the worst in people. Few of the contestants came across terribly well.”
Michael Hogan, The Telegraph