Still Game; Not Going Out; Civilisations

“A sharp-witted, old-school sitcom, but with an original twist” 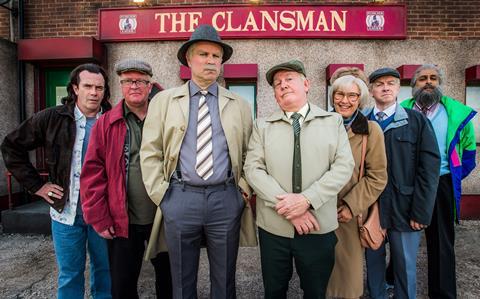 “The characters’ average age is, at a guess, about 75. The same went for a couple of the punchlines. But Still Game is funny because it is rooted in something authentic. The run-down, pebble-dashed Clansman, which provides the locals’ epicentre, is the type of pub you find everywhere, where taking the piss is the daily currency.”
Carol Midgley, The Times

“The reason for the show’s popularity is clear. It delivers on the promise of waggish codger comedy. This is a sharp-witted, old-school sitcom, but with an original twist.”
Jasper Rees, The Telegraph

“The latest return of Still Game is like a much-needed dram of Scottish comedy to warm the cockles in this so-called Spring. ‘Fly Fishing’, the opener of series eight, has all the ingredients of classic Still Game. While the last series blew hot and ‘cauld’ throughout its run, this is a consistently funny half-hour.”
Nick Mitchell, The i

“Deliciously un-PC, many will sympathise with this group of curmudgeonly pensioners who don’t understand why things have to change.”
Claudia Connell, Daily Mail

“Every time a stand-up comedian has a baby and turns their act into a nappies/too-tired-for-sex-any-more routine they hit themselves with the bland stick. They have become 60 per cent less funny. So it has been lately with Not Going Out. The gags are still fired tommy gun-style. But it lacks the edge it once had.”
Carol Midgley, The Times

“The quips came thick and fast like machine-gun fire. Most hit the target. Yes, you can see the gags coming from a mile off but Lee Mack has such a likeable quality that he’s able to carry it off.”
Claudia Connell, Daily Mail

“If last night’s opener was anything to go by it also has the legs to run and run.”
Ian Hyland, The Mirror

“A fascinating tour through the history of the human form. Though it was rich, obviously, in things to look at, the classics expert wasn’t just presenting a slide show. She had things to say about the human image and whether we agreed or not, we were forced to think.”
Matt Baylis, Daily Express

“Mary Beard deployed some finger-wagging lexicon that would never have tumbled from the lips of Kenneth Clark in the original Civilisations. She fetched up at Syon House and tacitly rebuked Clark for the ‘distorting and sometimes divisive lens’ through which the West views other cultures. It was a bit of a sneaky low blow in an otherwise inclusive, democratising essay.”
Jasper Rees, The Telegraph