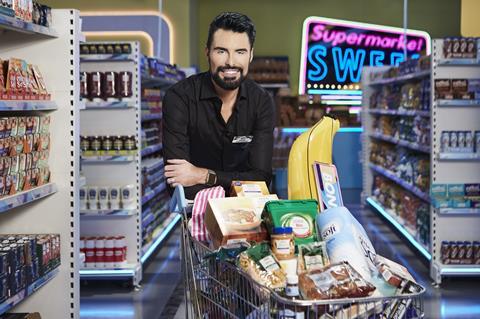 “Rylan Clark-Neal has taken over hosting duties and you would think it would be a perfect fit. He is a strong presenter, funny and quick, but he seems frozen by the format; by having to get through the admin of asking questions and adding time. He works best when he is winging it – here he seems to have gone method and plays the haughty shop manager a little too well.”
Rebecca Nicholson, The Guardian

“Clark-Neal was all teeth and tan, like a game show host should be. It takes a certain kind of chutzpah to carry it off – taking it deadly seriously at times, tongue firmly in cheek at others – and Clark-Neal was a natural. The whole confection was as cheesy as the dairy aisle yet irresistibly charming.”
Michael Hogan, The Telegraph

“All in all, a faithful revival then, with just the right nods to a new era (a bag for life) and minimal tweaks to its beloved format. Its only real failure is, sadly, monumental: its time slot. Elevate it to primetime when it is no longer the best – or only – thing on, and its day-glo zest can only feel dimmed.”
Sarah Carson, The i

“Whatever your view of A Confession it has not thus far stooped to gratuitousness in recounting the murders of Sian O’Callaghan and Becky Godden. The primary focus is on police procedure and the investigation into the killer, Christopher Halliwell, which ended a good detective’s career. It took a risk last night, charting the police operation so meticulously some viewers might have found the fare too dry.”
Carol Midgley, The Times

“Focusing on the female victims and their families, not just the heroic detective, wasn’t just dramatically satisfying but prevented this excellent series from becoming exploitative. Riveting, certainly, but responsible too.”
Michael Hogan, The Telegraph

“In a real-life drama that has unflinchingly shown us kidnapping, prostitution and the trauma of grief, the scene of Becky shrieking and spitting at her mum as she begged for heroin was the most shocking of all. This was a starkly painted portrait of an ordinary family consumed by a nightmare.”
Christopher Stevens, Daily Mail