“A hilariously cheap way to liven up a repeat, but it worked rather well” 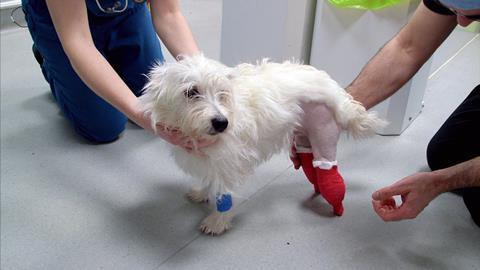 Puppies! Cute puppies! Chubby puppies, shaggy puppies, dinky little sausage dog puppies. All heartbreakers with tough starts in life, all saved thanks to the Supervet himself, Professor Noel Fitzpatrick; a man with the looks of a brooding Serie A football manager, if that manager could fit bionic feet to a West Highland terrier. If you’re a Supervet regular you will have been familiar with all the cases here, as the programme followed up some of its most memorable cases.
Anita Singh, The Telegraph

“Not only is this a hilariously cheap way to liven up a repeat, but it worked rather well. It was a joy to see Chica the bulldog, who needed pins in an elbow fracture aged three months: she’s now a fat, soppy, slobbery armful of cuddles who worships her master, Sean. You can’t help thinking that, if the best moments on television yesterday were filmed on phones by a besotted dog owner and a pair of holidaying pensioners, the next victims of Covid-19 might be professional camera crews.”
Christopher Stevens, Daily Mail

“Trapped on the Diamond Princess, the serial cruisers David and Sally Abel made daily videos about their plight, which filled much of this film’s airtime on a shoestring. The social media broadcasts stopped when David became seriously ill with the virus [Covid-19] and was taken off the ship, spending three weeks in a Japanese hospital. Now hale and hearty once more, the Abels proved enthusiastic narrators, even being bullish about cruising again. Another couple on a different ship related their story via the medium of song, her on vocals, him on the keyboards. It was a bizarre interlude, but these are bizarre times.”
Carol Midgley, The Times

“After Covid-19 hit, shares in some cruise companies plunged by more than 80 per cent. They were damaged by the perception that ships crammed with elderly passengers were coronavirus deathtraps, rife with disease. Someone coined the lurid phrase ‘floating petri dishes’, which proved more destructive than a torpedo in the bows. Never take holiday tips or investment advice from a TV column, but on the strength of this one-hour report I wouldn’t write off the cruise industry just yet. It isn’t just the money involved, though there are 120 ships lying idle around the world. It’s the sheer resilience of the passengers.”
Christopher Stevens, Daily Mail

“I never had The Hand of God down as one of Alan Bennett’s more memorable monologues, even though it was originally performed by the mighty Eileen Atkins. But it is a fine meditation on human venality and snobbery, and Kristin Scott Thomas was mesmerising as the brittle, sharkish antiques shop owner Celia, who bitched about her customers and sized up her friend’s antique bed for a sale even as she lay dying in it.”
Carol Midgley, The Times

“The series is full of such light, decorative touches, calling back to the books for the generation that loved them, without alienating the younger audience, making it a fonder, more family-oriented show than you might expect. One of my favourite cross-generational moments was Kristy objecting, in time-honoured fashion, to her mother getting remarried to long-term boyfriend Watson and wearing a ring as if “you’re his property”. Elizabeth tells her she’s changing her name to “Ofwatson”, too. Come for the peppy nostalgia fest, stay for the Handmaid’s Tale gags, ladies.”
Lucy Mangan, The Guardian