Surviving the Virus: My Brother and Me; Harlots; Lose a Stone in 21 Days with Michael Mosley

“A powerful, sobering hour of television” 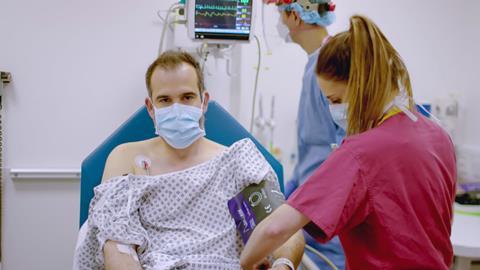 Surviving the Virus: My Brother and Me, BBC1

“Chris, an infectious diseases doctor, has returned to front-line medicine for the first time in a decade, such is the scale of the pandemic. We followed him as he chatted to patients and staff at University College Hospital London. The amount of footage from hospitals we have seen in recent months, as well as all the numbers, sometimes threatens to desensitise us. But this film was so intimate, it almost felt invasive. A powerful, sobering hour of television.”
Rupert Hawksley, The i

“The willingness of doctors to admit that they do not know things, do not have all the answers, and their intelligent readiness and confidence to advise according to the knowledge they do have, contrasts so sharply with the cowardly shuffling and incompetence of those in power that you flinch every time. Surviving the Virus covered a lot of factual and emotional ground, but it is the sight of people with the humility to stay open, the wit to learn, the ability to make connections and the scientific training to help them synthesise information, theorise, adapt and innovate that stay in the mind when the credits roll. The sight of competence and informed best efforts is a dreadfully striking one these days.”
Lucy Mangan, The Guardian

“Inevitably, the documentary was piecemeal and episodic, snapshots from a chaotic battlefield. But the war against Covid became deeply personal when Xand, who suffered a bout at the start of lockdown, was rushed to A&E with related heart palpitations. Chris watched in tears as his twin underwent defibrillation in surgery — having his heart stopped and restarted to cure the flutter. Medical reporting doesn’t get more dramatic than that.”
Christopher Stevens, Daily Mail

“At a time when Covid-19 has denied families the right to visit their loved ones in hospital, it has been galling to see celebrity TV presenters given access-all-areas to the wards for a spot of light investigative reporting. Ross Kemp did it for ITV a couple of months back. The ubiquitous Stacey Dooley was at it last week, hovering over a baby being resuscitated at a maternity unit. Thank goodness for the Van Tulleken twins, Chris and Xand, who are accomplished television presenters but also actual doctors whose presence in hospital is a help rather than a hindrance.”
Anita Singh, Telegraph

“The programme was more interesting than the title suggested because rather than just case-studying Covid patients, Xand actually was one. It was also terrifying to see what a vile wrecking ball this virus is, laying waste to patients’ lungs and sometimes hearts, brains and kidneys. It sometimes keeps tricks up its sleeve; one man suffered a massive stroke ten days later. “This is a horrible virus that can affect every aspect of your body,” a doctor at the hospital said. The best documentary the brothers have done.”
Carol Midgley, The Times

“The show does what it says on the tin. If you were shocked by the sight of naked bottoms and frequent references to parts of the female anatomy, well, you can’t say you weren’t warned. This is a bawdy period drama about rival 18th-century brothel madams and their girls. One of these madams is the earthy Mrs Wells (Samantha Morton), who is about to auction off her youngest daughter’s virginity to the highest bidder. Watching this show from a 21st-century perspective requires some mental contortions.”
Anita Singh, Telegraph

“Everyone wears 18 layers of satin and fake taffeta. The bedroom scenes look like explosions in Boy George’s laundry basket, with a bare bum protruding here and there. ‘The cheesiest Eighties electro-pop would be better than the hideous noise of the Harlots soundtrack, which alternates between heavy metal folk music and weirdly tuned drums that sound like a harp made from rubber bands.’ There’s not much to add, except it didn’t improve on a second viewing.
Christopher Stevens, Daily Mail

“One minute it is sad, the next slapstick, the next violent, the next funny with ludicrous dialogue. “Who dares to interfere with an Englishman’s right to go whoring?” one punter said, coitus interrupted. The women don’t have rotting teeth or depression, and what have they done with those bosoms — inflated them with a bicycle pump? It is extremely watchable and well made, but the two-dimensional characters mean you cannot take it seriously. It is, ultimately, exploitation for laughs and a running buffet of knockers.”
Carol Midgley, The Times

Lose a Stone in 21 Days with Michael Mosley, Channel 4

“There will always be people who claim these sorts of programmes set out to humiliate fat people; that being happy in yourself is what matters. Normally I’d agree. Eating should never be framed as a shameful act (I was quite cross with Mosley when he talked about rummaging through the volunteers’ cupboards to discover their “deepest, darkest secrets”). But Covid-19 has changed all that. The data is clear. Our lives, I think we can all agree, are more important than our feelings.”
Rupert Hawksley, The i