“Taskmaster is the show we need right now” 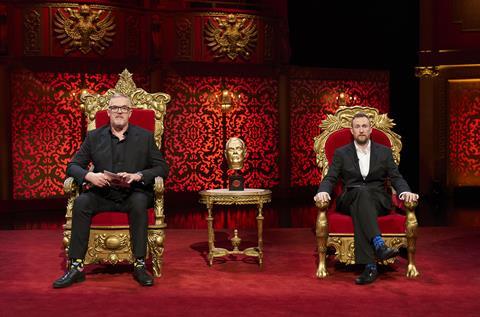 “Like Bake Off, Taskmaster seems to have suffered not a jot from the translocation. All is gloriously as it gloriously was. Which is to say – charming, batshit, hilarious, determinedly low stakes, entirely absorbing and restorative throughout.”
Lucy Mangan, The Guardian

“I had never seen Taskmaster before this week. How pleasant, then, to discover that Taskmaster is neither blokey nor political. It is just a very silly light entertainment show, which I mean as a compliment, in which most of the enjoyment is derived from seeing how much the people on it are enjoying themselves. It’s fun, and nothing else is at the moment. Taskmaster is the show we need right now.”
Anita Singh, The Telegraph

“Playing the imperious titular ‘taskmaster’ and his fawning courtier, Greg and Alex make a strong double act. As contestant Richard Herring pointed out, the core of the format is not how well the players perform the tasks, nor whether they make complete fools of themselves. The fascination is in seeing celebrities desperate for approval, even when they know it’s a set-up.”
Christopher Stevens, Daily Mail

“The first of the three-part The Trump Show is thoroughly entertaining, blending cringingly embarrassing clips and tweets from the first 18 months of the Trump administration and adding plenty of fresh detail and insights.”
Sean O’Grady, The Independent

“It was a light treatment, superficial and gossipy in an entertaining way. So much has happened in the past four years that the film barely scratched the surface. But it showed us that, for all his absurdity, Trump is a canny political operator and master of tapping into the national mood.”
Anita Singh, The Telegraph

“There was much we had seen before in this film but it was punchy and spritzy, although sadly the first episode didn’t get round to interviewing Stormy Daniels.”
Carol Midgley, The Times

“This three-part series is not just a sneer. It asks whether the media has misjudged The Donald, dismissing him as a showman and failing to grasp what a natural demagogue he is. The outrageousness of the anecdotes was gripping.”
Christopher Stevens, Daily Mail