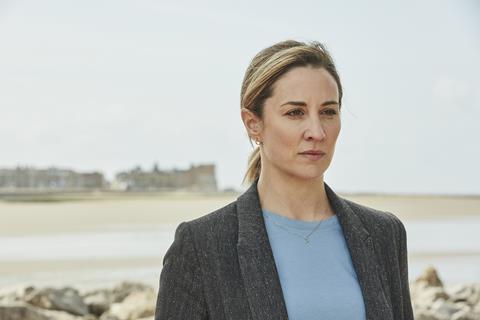 ITV’s crime dramas can be a mixed bag – let us never speak of modern-day Van Der Valk again – and the first series of Morecambe-set The Bay was so-so. It suffered from some silly plotting and inevitable comparisons to Broadchurch, but had the benefit of the talented Morven Christie as family liaison officer Lisa Armstrong. Writer Daragh Carville appears to have taken the criticism on board, because the set-up in this first episode of series two was sharply done.
Anita Singh, Telegraph

“Well, that was unexpected. Yes, you’d have thought that not even the battiest plot twist in a 9pm television thriller could rival the insane shenanigans that pass for real life these days. Yet here was The Bay, the seaside-town detective show returning two years after its first series got it labelled “Broadchurch in Morecambe”, successfully going crazy-ape bananas sooner than anyone expected. All six episodes are available to binge from the ITV Hub already, if you can’t wait weeks for all their gnarly secrets to come out. The Bay could just be the downbeat yet propulsive distraction we need right now.”
Dominic Maxwell, The Times

“The mistake that The Bay made first time round was to suppose that Lisa’s domestic problems were more interesting than the hunt for a missing child. It’s hard to sympathise with a character who puts her own worries above that kind of investigation. This time round, the balance is better.”
Christopher Stevens, Daily Mail

“The Bay really isn’t good enough, not even for passing the time in lockdown.”
Sean O’Grady, The Independent

“This new series is every bit as sparkling and inventive as the previous three, and fans can anticipate some piquant surprises, as well as guest appearances from Jean Reno and Sigourney Weaver. All the performances are pitch-perfect, but the stand-out has to be Camille Cottin playing the hard-nosed, hard-pressed lesbian Andréa, whose efforts to juggle her professional life and a baby form a major plotline. There’s plenty of intrigue afoot, but nothing really nasty occurs. Like Schitt’s Creek, it’s all immensely likeable – perfect escapism for a bleak winter.”
Rupert Christiansen, Telegraph

“Call My Agent! is as soapy as it is serious, as willing to throw in a big, melodramatic shock moment as it is to sit and savour its quiet and profound beats. At times, its silliness stretches credulity – most of the plots could be resolved in five minutes, if only the characters would talk to each other directly – but it is so charismatic that it almost always gets away with it. I have grown extremely attached to the ASK family, to the extent that I began offering unsolicited advice to the screen.”
Rebecca Nicholson, The Guardian

“If the premise seems unoriginal, the resulting series is anything but. Far from a compendium of clichés about the showbiz world, Call My Agent! is not only a hymn to the art of cinema, but also a subtle skewering of the abnormality of fame, with each episode featuring a big name sending themselves up in vaguely plausible ways.”
Patrick Smith, The Independent

“This wasn’t so much a documentary as a series of witness statements from people who have been mocked, beaten up and even driven from their homes, for no reason other than their disabilities. It’s an ugly truth that is not addressed often enough. As Hannah, a young woman with cerebral palsy, pointed out, there are not nearly enough role models on TV and social media with disabilities. That has to change.”
Christopher Stevens, Daily Mail

“Bulletproof is a caper, not a social commentary. And while the stunts and explosions have got bigger, none of it outshone Clarke and Walters, a charming and believable central duo. Their fond squabbles (“Bruv, you’re meant to be talking him down, not giving him reasons to jump”) were underscored by a touching depth. They might be in the middle of surveilling a suspect but they’ve still got time to reaffirm their love for each other – literally, with Pike telling Bishop “I love you, man” and presenting him with a birthday cupcake. It’s adorable stuff. Perhaps not everything we watched needs to be laced with nuance: with cinemas closed, this is the kind of punchy, popcorn escapade that fills the blockbuster gap nicely.”
Rachel Sigee, The i