The City & The City; Jesus’s Female Disciples; Ordeal By Innocence 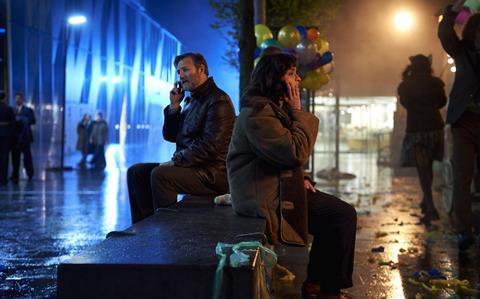 “This feels like last year’s SS-GB with extra lashings of gloomy cynicism. Director Tom Shankland has commuted between the seamiest and grandest parts of Manchester and Liverpool to put a face to China Miéville’s crazy imagination.”
Jasper Rees, The Telegraph

“Beautifully, the camera always seems to have something smudged on the lens (infuriating at first, to be honest), as if we – and Borlu – would be able to see the full picture if only we rubbed our eyes and really looked. It could all fizzle into nonsense, but I am on tenterhooks ahead of episode two.”
Chris Bennion, The Times

“Channel 4’s The Handmaid’s Tale has already proved it’s possible to translate a richly imagined dystopia from page to small screen, but so far, this flat-footed adaptation has apparently been held up at the border.”
Ellen E Jones, The Guardian

“Bible experts Helen Bond and Joan Taylor are determined to prove that the women in the greatest story ever told have been gradually side-lined and all but erased. Naturally, to do this they must go on a journey. I have long since given up hope that another means of historical TV investigation might be deployed. One where an expert with a headful of facts gets to show and tell their findings without the window dressing of a buddy movie.”
Julia Raeside, The Guardian

“The conjecture was occasionally a little broad. But the duo made for entertaining and erudite guides, barrelling through the Holy Land in a hire car and doing some Indiana Jones-style clambering among catacombs and secret churches.”
Jeff Robson, The i

“Presented with clarity and passion, could Bond and Taylor’s findings cause ‘nearly a quarter of the world’s population’ to ‘rethink the origins of their faith? We can hope.”
Matt Baylis, Daily Express

“Their boasts at the start of the documentary were ambitious. But their evidence was next to non-existent. The rest of Bond and Taylor’s case consisted of complaints that All Men Are Rotten Lying Swine and have been for 2,000 years.”
Christopher Stevens, Daily Mail

“The production is sumptuous. Director Sandra Goldbacher understands that classic crime is highly choreographed, like a dance, and she reflects that in the way suspects are shifted in and out of shot. The whole production is glorious to behold.”
Christopher Stevens, Daily Mail

“Hell is having to wade through three agonising weeks to get to the bottom of this otherwise impeccable Agatha Christie whodunnit. Sarah Phelps’s heady adaptation seems designed to be gulped down in three greedy helpings, not eked out over a fortnight like a large piece of boiled ham.”
Chris Bennion, The Times