The Death And Life Of Marsha P. Johnson: review

A sobering documentary looks at how transgender people have been treated as second-class citizens, even in the LGBT movement 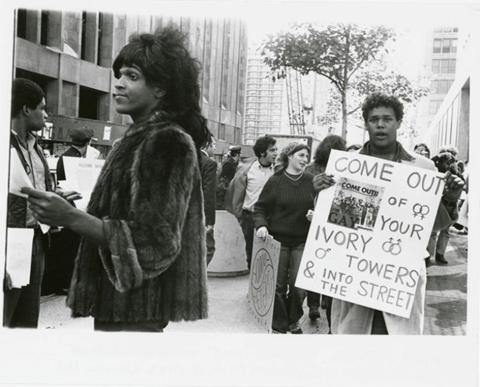 In The Death And Life Of Marsha P. Johnson, the quest to unravel the final days of a transgender icon reveals few answers but lays bare a community too often imperilled and vilified. This sobering documentary chronicles the legacy of Johnson, whose 1992 death was ruled a suicide, something nobody close to her believed, with her friends fearing she was murdered and suspecting that the police didn’t bother to even investigate.

Pointedly recounting the history of the LGBT movement in New York, director David France shines a light on how, even within that community, transgender people have been treated like second-class citizens.

Premiering at the Tribeca Film Festival, Death And Life won’t have broad commercial appeal. (France’s last documentary, the Oscar-nominated How To Survive A Plague, grossed little more than $130,000 in the US.) But strong reviews and pertinent subject matter will raise the movie’s visibility, which should lead to festival exposure and a modest theatrical release.

Death And Life introduces us to Victoria Cruz, who at 70 has long worked for the New York City Anti-Violence Project, which advocates for the rights of LGBT individuals. Nearing retirement, Cruz devotes her time to pursing the unresolved death of Marsha P. Johnson, who moved to New York in the 1960s and helped organize the Stonewall Riots.

Convinced her death was not a suicide — Johnson’s body was recovered from the Hudson River in early July 1992 — Cruz tries to get the case reopened, interviewing people who knew Johnson and hunting down the detectives who handled the investigation.

That whodunnit narrative hook gives Death And Life its forward momentum, and in Cruz, France has found a fascinating central figure. A transgender woman who started at the Anti-Violence Project after suffering a vicious assault herself, Cruz sees her quest in deeply personal terms, which adds extra poignancy and urgency to her mission.

The film doesn’t arrive at any particularly compelling alternative explanation to what happened to Johnson, France sometimes straining to ratchet up the suspense when Cruz begins digging into possible leads. Still, Death And Life raises enough suspicion to make viewers question the official explanation for Johnson’s death at the age of 46.

Perhaps more importantly, though, the documentary highlights that, for the transgender community, frustration and pain can be depressing commonplace. Although it’s Johnson’s name in the title, France’s film subtly broadens its focus so that the experiences of three transgender women are explored in-depth — and none of them are particularly happy stories.

Johnson is lovingly memorialised by friends, who bitterly recount the abuse transgender people faced in New York over the last several decades as they tried to live their lives. Proudly out and wearing fabulous gowns in public, Johnson is seen in archival footage as a vivacious, defiant woman — which makes it even harder to believe she could have killed herself.

France movingly contrasts the ebullient Johnson with her close friend and fellow advocate, Sylvia Rivera, who is presented as a more combative and troubled individual. In electrifying footage from a 1973 Liberation Day Rally, Rivera shouts down gay and lesbian people who boo her, the riveting moment echoing a deep schism in the movement provoked by those who wanted to take their cause to the mainstream by shunning transgender individuals.

Death And Life creates a mini-portrait of Rivera through old interviews, and it’s heartbreaking to watch such a fiery person eventually grow disillusioned while being treated by some as a pariah — a despairing indication of how the gay community, while fighting for tolerance, wasn’t immune to transphobia.

The ghosts of Johnson and Rivera (who died from liver cancer in 2002) haunt Death And Life, and one feels the burden of their legacy weighing heavily on Cruz’s shoulders. This older woman may be diminutive and physically ailing, but her pitbull tenacity to bring justice to Johnson powers her.

Perhaps on some level France knows that her journey to learn the truth will prove fruitless. But Death And Life argues that taking on seemingly impossible quests has been the only way the transgender community has ever made progress. In a way, Cruz’s mission is just the latest fight — and far from the last.