The Deceived; Jürgen Klopp: Germany’s Greatest Export; Once Upon A Time in Iraq

“You don’t know where it is going and who is telling the truth, which is most refreshing” 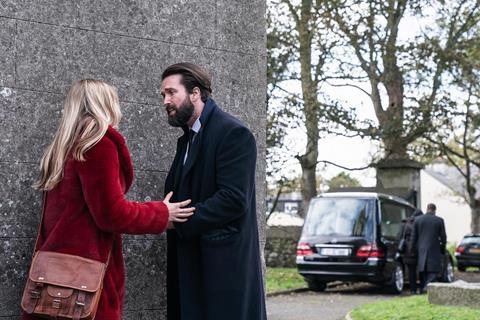 “The Deceived is solidly done and manages to touch gracefully on concerns about (especially emotionally) abusive relationships, power dynamics, coercion and how we navigate ever-changing mores. Ophelia and Michael’s scenes together are particularly well pitched – if she were just a little older and wiser, if he were just a little more obvious or overbearing, or just a little less confident and clever, you could see how they might all escape unscathed. But … There is nothing hugely innovative on show, but seeing old things done well is a pleasure all of its own. Cosy on down and enjoy.”
Lucy Mangan, The Guardian

“At least you don’t know where it is going and who is telling the truth, which is most refreshing. Lisa McGee (Derry Girls, Being Human), along with her co-writer (and husband), Tobias Beer, have created a situation in which no character is likeable, yet it is still enjoyably seductive. Just like Michael (Emmett J Scanlan), who seems to have spent his time smoking in his lecturer’s turret, pausing only to give female students the benefit of his hardbacks. He seems so obvious a cad, blithely giving pregnant Ophelia the Aran jumper of his dead wife, Roisin, who died in a fire only the week before, that I’m beginning to suspect he must be a good guy.”
Carol Midgley, The Times

“Have you been suffering from Paul Mescal withdrawal symptoms? For a few heady weeks, it seemed as if everyone had fallen in love with the Irish actor thanks to his role as Connell in Normal People. Well, rejoice, because he is back, in a thriller called The Deceived. And he was essentially playing the same character, except this time he was a builder. This means that, instead of looking dreamy while awkwardly discussing his feelings, he looked dreamy while awkwardly saying things like: “Place is a deathtrap. See that? Polyurethane foam. Basically solid petroleum.” Phwoar!”
Anita Singh, Telegraph

“It was to McGee and Beer’s credit that you finished this taut opening episode doubting everyone and everything you saw.”
Sarah Hughes, The i

“Some football managers end up in entertainment shows: look at Harry Redknapp and his late-flowering showbiz career. Jürgen Klopp started out in one, appearing on a German game show back in 1995 when he was a little-known player for Mainz in the Bundesliga 2. The footage was dug out for Jürgen Klopp: Germany’s Greatest Export, and watching him laugh good-naturedly as he was mocked by the host was to see a man entirely at ease with himself. Try to imagine, if you will, Roy Keane making a similarly amiable appearance on Blankety Blank.”
Anita Singh, Telegraph

“”I’m a totally normal guy,” he said at his initial Anfield press conference before going on to speak about how special the relationship could be. It was the sort of thing, as one commentator correctly noted, that you only say when you secretly believe that you are anything but normal. Klopp’s charm is that he tempers those moments of arrogance with charisma and just the right amount of self-mockery, ensuring that even the most Liverpool FC-phobic can’t help but wish him well.”
Sarah Hughes, The i

Once Upon A Time in Iraq, BBC2

“We saw the ghastly, excruciating footage of his hanging broadcast on TV, Saddam the monster tormentor now tormented and mocked to his last breath. We had seen it before, but in this context, knowing how he had spent his final days, it felt more hideous. As the CIA analyst John Nixon said, it shouldn’t have happened like this, a kind of mob justice. “I began to feel complicit in an almost criminal action,” he said. Then those concluding four words that epitomise why the Iraq war was such a catastrophe: “And then Isis came.” Outstanding documentary-making.”
Carol Midgley, The Times