The Falcon and the Winter Soldier; The Secret Science of Sewage; Taskmaster; Sky Rojo 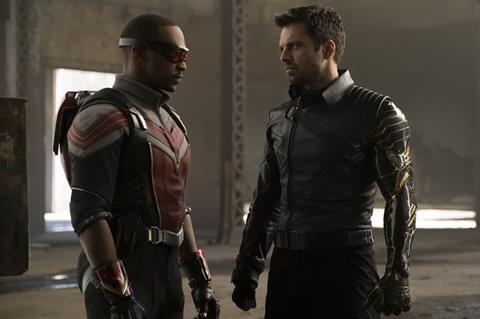 The Falcon and the Winter Soldier, Disney+

“It’s a far more conventional yet mostly entertaining action adventure that, in its first episode at least, promises an Avengers extension that will please core fans and provide a smooth entry point for those less well-versed, an encouraging sign of things to come. While on initial glance, it’s unlikely to cause the same amount of online rabidity as WandaVision, there’s something reassuringly slick about its scale and storytelling, a much-needed injection of pomp at a time when most of us are still sorely lacking the visceral thrill of the multiplex experience.”
Benjamin Lee, The Guardian

“The start, at least, is breath-taking – a fight scene set high above an epic North African desert. However, from there The Falcon and the Winter Solider is solid but never quite spectacular. This table-setting opener has oodles of potential. But, in a departure from Marvel’s recent track record, it fails to set the world alight.”
Ed Power, The Telegraph

“Malcolm Spellman’s The Falcon and the Winter Soldier is slick, straightforward and unashamedly invigorating. The action scenes are, as ever, fantastic; the mix of violence, pyrotechnics and superhero ingenuity making way for the odd joke. Perhaps that’s why the scenes away from Avengers business fall flat. The attempt to humanise its central characters is commendable but it’s hard to stay interested while coming down from an adrenaline-fuelled knockabout.”
Emily Baker, The i

“The Falcon and the Winter Soldier will leave you neither overwhelmed nor underwhelmed. To steal a line from 10 Things I Hate About You, it is the TV embodiment of ‘whelmed’ – a sturdy, functional and generally not-bad vehicle for a handful of the studio’s B-listers.”
Adam White, The Independent

The Secret Science of Sewage, BBC2

“I won’t dwell on Dr Zoe Laughlin’s experiment using soya bean paste, the industry standard for simulating stools in water, because we’ve all suffered enough this year. Instead let’s look to the positives, of which, surprisingly, there were many. I shit you not, they were damned fascinating.”
Carol Midgley, The Times

“If you had watched it, you might have found this Horizon film to be pretty interesting. It showed us how a sewage works operates – this one on the outskirts of Birmingham – but also explored ways in which all this waste could be harnessed for treating disease and charging your mobile phone. Fair play to the BBC for serving up an unpalatable subject as part of its science output.”
Anita Singh, The Telegraph

“It all adds up to a hill of beans and you could argue that Taskmaster is perhaps nearing its sell-by date. Yet the chemistry between Alex Horne and Davies (also rarely unfunny), being vindictive from his cheap-looking throne, just works. There’s a place for this stupid, harmless comedy, a pound shop theatre of the absurd. It’s here, and it’s good to have it back.”
Carol Midgley, The Times

“Taskmaster is a welcome dose of fun, even if the five rivals are seated so far apart that they have to cup their hands and shout to make their ad-libs heard. It’s all innocent fun, with the atmosphere of a school sports day running out of control.”
Christopher Stevens, Daily Mail