The Fall of Singapore: The Great Betrayal

Drama sequences were the only way to bring our documentary’s story to life. But limited time and budget called for some creative thinking, writes Paul Elston 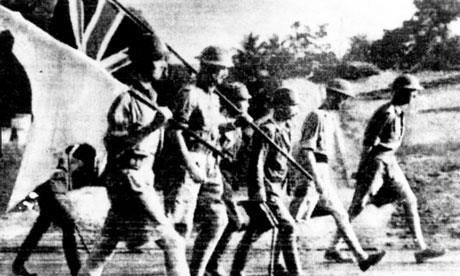 On a 13-hour plane journey to Singapore, as people snored or weighed up whether to watch Meet The Fockers again, I thumbed through hundreds of pages of old classified documents. In bright red rink made by an MI5 stamp, the words Top Secret were marked at the top of every page.

It was an incredible story that had lay hidden for 70 years: a group of British officers had given the Japanese the intelligence and technology to take out both Pearl Harbor and Singapore in WWII. Amongst the bundle were secretly photographed handwritten letters, complete with signatures of the main culprits, typed up transcriptions of phone taps from 85 years ago, and even the photo one of the main British offender in a Japanese Kimono.

But one file stood out: the verbatim interrogation of one the suspects by an MI5 boss and the director of public prosecutions. They too had had access to all the surveillance material I had been reading, but were not able reveal it to the suspect, for fear of blowing MI5 sources.

It was an extraordinary dramatic narrative: they knew what he’d done, but couldn’t  tell him. From their language it was obvious that his lies were making them more and more angry, principally because they could not let him know what they knew.

What a fantastic story, I thought: it would make a brilliant drama, but we didn’t even have the money to produce a documentary. And at that stage, we really didn’t have the money.

By December, the film was commissioned, contracts were not signed, and the budget had not yet come through. I was funding the research trip out of my own pocket, with delivery set for the end of March.

Two weeks later, and still bleary–eyed, I was on the doorstep of the executive producer I had hired to help me with the project. He was an old friend, and old pro, a tower of support on the film. I was worried: we still had no funds and didn’t think we could do the documentary for the money. He’d just been through my first stab at a shooting script. There were so many fantastic documents, but how would we illustrate them?

“There’s only one thing for it,” he said. “You have to do the main interrogation as scripted drama.”

Scripted drama? How? When? With what? We had no money, no time, and it was the absolute bête noir for documentary commissioning editors. Remember all those hammy, clammy cod ‘factual dramas’ from the mid naughties about erupting volcanoes, and historical period people running around in fancy dress? Many were made for between five and ten times my budget.

“But it’s time on screen,” said the trusty exec. “And you don’t have the graphics budget to do it. How else will you will illustrate the documents?”

“Err, well, I’ve never directed scripted drama before, but it can’t be that difficult – I’m sure you’ll work it out.”

Two months later. A cash-strapped budget had now come through from the Beeb and we had filmed the documentary in Singapore – the money had been so tight I’d made the nerve-crunching decision of not having a soundman to save some pennies.

Now I was starting the edit, and in order to make the rough cut. I now had three weeks to script, cast, set-up, film and edit the drama, whilst simultaneously cutting  the documentary. I had lost a lot of hair since Christmas, and I hadn’t even done the difficult bit.

I had cast actors before, but this was scripted drama, not reconstruction – they really did have to be able to act. The production manager started ringing agents; when she mentioned budget the reply I could hear coming back over and over again was: ‘How much?’

Calling in the cavalry

We had no money, but even more crucially we had no time: the task seemed an impossible one. Suddenly I had a brainwave: I run the factual committee of Directors UK. But the chairman, Charles Sturridge, had made Brideshead Revisited and had won more Baftas than I’d shot rolls of HD cam.

If I tried to audition hundreds of wannabee actors, which is all I thought I could afford, I’d never make delivery – but if he could help with some top tips of people who he knew could really do it - in time and for this money – we were in with a fighting chance. Also his name would be helpful in twisting the arm of unwilling agents.

I gave Charles an ultimatum, which acting as a strong incentive: if he couldn’t find me the actors, I threatened to cast him as the director of public prosecutions.

Finally, after dozens more rejections and questions about money, we assembled a cast with five days to go. And what a cast: between them they had credits like Remains Of The Day, The Iron Lady, Shackleton and Drop The Dead Donkey. Needless to say, they were all doing it for the love, not the money, and certainly not for the rehearsal time – we didn’t have any.

We had one read through on the day, and then shot the script from the perspective of each actor. They were all word-perfect with their lines – and there were a lot of them. We filmed the scripted drama in half a day, with the other half for drama recon set-ups.

Because of the lack of resources, I had to produce, write and direct. The PC became first AD, and an old mate, despite not being a professional, covered second camera with a 5D. My niece did the clapper without a clapper (using both hands), and helped out with make-up and wardrobe.

A week later and the commissioning editor gave his feedback on the first cut. I could feel my pants rumble as I waited for his reaction.

“I loved the drama – where did you find the actors?”

My half a day drama shoot had made seven minutes gripping drama on screen – it didn’t look hammy or clammy, but great.

And the moral of the story? Join Directors UK. I couldn’t have done the drama without the them.