The Great British Bake Off; Danny Dyer on Harold Pinter; The Write Offs

“This was a reliably wonderful return: with the news that we might be inside for a long while yet, it is a joy to have this show back for an hour each week.” 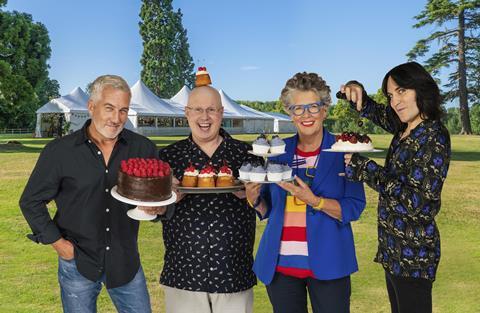 “I am not sure there could have been a more appropriate time for this cosiest of television shows to come back, bringing with it the promise of a weekly distraction in the form of cake, bread and 12 decent people supporting each other through thick and thin batter. It helps that Matt Lucas and Noel Fielding are friends; their rapport is lovely to watch. More than anything, though, this week’s showstopper is one of the funniest I have seen in the history of Bake Off.”
Rebecca Nicholson, The Guardian

“There was no fanfare for new arrival Matt Lucas, taking over from Sandi Toksvig as Noel Fielding’s partner in crime, but he slipped into her shoes rather snugly, eliciting the same warmth and gentle cutting wit to the new batch of bakers. This was a reliably wonderful return: with the news that we might be inside for a long while yet, it is a joy to have this show back for an hour each week.”
Henry Bird, The i

“Lucas proved a good addition, balancing a tea cup then a rolling pin on his head, singing Roger Whittaker songs and eating a lot of cake. He brings surrealism and silliness and I hope his humour isn’t neutered like Noel Fielding’s seems to be. This was as good an opening episode as I’ve seen.”
Carol Midgley, The Times

“The Great British Bake Off is back, as cheering as we hoped it would be but a little more surreal. The 12 contestants are a winning mix, although I think we have a diversity problem: somehow there are three accountants.”
Anita Singh, The Telegraph

“A cannily populist piece of scheduling in the early days of Sky Arts on Freeview, it was guaranteed to catch the eye on your viewing guide and cheekily borrowed one of the BBC’s marquee names for the sort of documentary you might once have expected on BBC Four.”
Gabriel Tate, The Telegraph

“Predictably brash and proletarian, Dyer set the tone for Danny Dyer on Harold Pinter early – personal, exploratory and deferential to his subject. This was not your typical arts documentary, and Dyer played straight into the mission of the newly free Sky Arts: to make arts programming more accessible and appealing.”
Emily Baker, The i

“The Write Offs could have gone one of two ways: either condescending and exploitative, or heartwarming and eye-opening. Thankfully the first episode erred on the kinder side. It was a stark reminder how many of us take reading and writing for granted. With a light touch, but never frivolous, this show allowed those too-often condemned as unintelligent to be brave and vulnerable.”
Emily Baker, The i

“Sandi Toksvig’s well meaning experiment has come precisely at the moment when reading has ceased to be essential. Worse, I worry that in the future it will become a source of embarrassment, a sign of educated ‘privilege’. When gifs and emojis are the universal language, the written word will be seen as snobbish. Sandi, for all your good intentions, your show gets a thumbs-down, plus a sad-face emoji.”
Christopher Stevens, Daily Mail