The Great Celebrity Bake Off; The Celebrity Circle; Caroline Aherne at the BBC

“It wasn’t quite a baking masterclass, but this slightly messy confection went down a treat.” 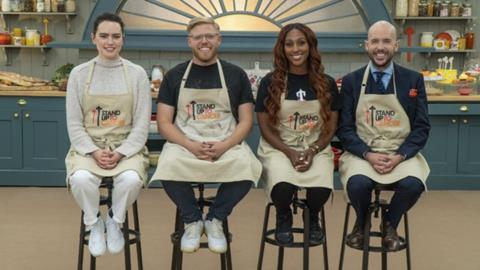 Stand Up to Cancer: The Great Celebrity Bake Off, Channel 4

“In this breezy and big-hearted opening instalment, Daisy Ridley was a terrific sport but, goodness, she made a proper Kylo Ren of her vegan banoffee millionaire’s shortbread. However, Ridley clearly enjoyed herself, while bonhomie flowed between all four contestants. It wasn’t quite a baking masterclass, but this slightly messy confection went down a treat.”
Ed Power, The i

“This celebrity edition was a different beast to the mothership series. Rather than nervous hopefuls dazzling us with their well-practised skills, this was a paean to pleasingly average amateur baking. A celebration of getting stuck in and having a go, all for a worthy cause. What could be greater or more British?”
Michael Hogan, The Telegraph

“As a television programme this Mardi Gras version always succeeds, even if we can’t pretend it’s anything like Bake Off proper. There’s no heat, passion or competition, and everyone is being nice to each other, but is that such a bad thing these days? The only archness came from the comedian and Bake Off: The Professionals presenter Tom Allen teasing Paul Hollywood about not working on a proper bakery show.”
Ben Dowell, The Times

“Half the entertainment in these celeb specials is working out which of the contestants is taking it seriously. Singer Alexandra Burke certainly was — not out of sheer competitive instinct, like Rob Beckett, but because she is obviously a good cook. Star Wars actress Daisy Ridley didn’t care how big a mess she made. Her showstopper was a broken toilet, possibly the most unappetising cake ever presented to the judges.”
Christopher Stevens, Daily Mail

“It feels like the last gasp of fame as we know it, celebrity culture collapsing in on itself, but as Nadia Sawalha and Kaye Adams began to flounder over their fake Gemma Collins flantering with Big Narstie, I knew I was in it for the long haul, or at least for all six episodes.”
Rebecca Nicholson, The Guardian

“Such generic rent-a-faces gave The Celebrity Circle an inescapable whiff of used goods. This was the televisual version of charity shop clothes which smell faintly of death. Which is a shame because the game itself was smart, snappily paced and ideally suited to the strange times we’re living through.”
Michael Hogan, The Telegraph

Caroline Aherne at the BBC, BBC1

“A brisk and entertaining homage to the late comedian. The problem is that the show was just a highlights reel. You came away reminded of her wit and her comic timing – but without a sense of what she was like off stage.”
Ed Power, The i