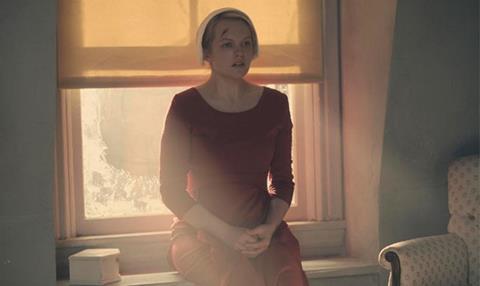 The men in black bring rocks in barrows. “Oh man, I hate stonings,” whines a young handmaid casually, as if she was complaining about something on the menu for lunch at school.
Sam Wollaston, The Guardian

There was a huge amount to be said for The Handmaid’s Tale, not least that the author of the original novel, Margaret Atwood, is right that women risk having their hard-won freedoms taken away from them. It was beautifully acted, despite the constant desire to shock, and cinematically it was stunning.
Virginia Blackburn, Daily Express

I was not prepared for the soundtrack to lose all emotional restraint at the end, piping up first with Nina Simone’s Feeling Good and then, over the credits, Tom Petty’s American Girl. I can only think that the producers, uncertain of getting a second run, needed to indicate a “happy ever after” future knowing that the plot had taken us to only the beginning of the Republic of Gilead’s crumbling.
Andrew Billen, The Times

Don’t expect to be gripped by a more potent or involving drama this year.
Jasper Rees, Daily Telegraph

For reasons best known to themselves – and I suspect it was to prove that they were up to the technical challenge – the producers decided to film the entire programme in one long continuity shot.  We moved seamlessly from burning building to ambulance to ward to individual crises without the camera once ever being switched off – and mightily impressive it was too.
Virginia Blackburn, Daily Express

The camera was constantly swinging around, racing down corridors and doubling back. At one point, it leapt like Spider-Man over a balcony and swooped to the ground floor. This was dizzying, and within 20 minutes had become quite nauseating. Nurse — I don’t feel well!
Christopher Stevens, Daily Mail

The tone was condescending and the soft cynicism invigilating the sentimentality went off for a fag break right at the end, allowing Duffy to make a speech — “just sometimes we make a difference” — that would have embarrassed Call the Midwife.
Andrew Billen, The Times

Here’s hoping Sir Mo moves faster than this show, at best a gentle trot through past glories. At times, it slowed to a trudge. All three stars are clearly devoted parents, which makes them even greater role models. But, really, their spectacular wins deserve a better salute.
Christopher Stevens, Daily Mail