“As natural-history programmes proliferate across TV, there is room for such imaginative explorations” 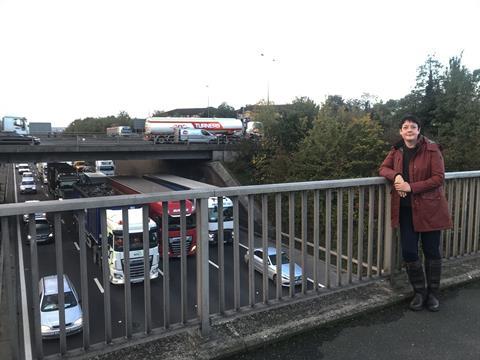 The Hidden Wilds of the Motorway, BBC4

“The Hidden Wilds of the Motorway was never going to be your average bit of natural history. As natural-history programmes proliferate across TV, there is room for such imaginative explorations. When Helen Macdonald ended at Rainham Marshes in Essex, gazing across at the silhouetted Queen Elizabeth II Bridge over the Thames at sunset, brutalist concrete encroaching on a teeming wilderness, it offered a less conventional form of beauty.”
James Jackson, The Times

“As McDonald walked the circumference of the M25, she showed us how skilfully nature deals with man-made monstrosities. For instance, an international cast of aerial predators and exotic waterfowl has made itself at home in the rubbish strewn Rainham marshes. In this languid 90-minute film – would it have got so much space without the virus-induced production drought? – Macdonald delivered a philosophical essay about art, history, science and evolution. Macdonald’s imagination roamed unchecked.”
Adam Sweeting, The i

“The second episode of Insecure’s fourth run ends with one of the most perceptive portrayals of a friendship in crisis ever committed to screen. There are no tears, screaming or hair-pulling. Rather, there is a blissful zoning out. It is not perfect. Like season three, it sometimes moves too slowly and the product placement occasionally feels relentless – especially when we get a closeup of a bottle of Lea & Perrins. But, ultimately, it takes us to an important place and shows that all of the progress the girls made can be undone without the right people around them.”
Harry J Davies, The Guardian

“Just how dark Bennett’s lonely worlds can be. Rochenda Sandall’s The Outside Dog — another superb performance — ended with her shrouded in darkness as she faced the horrific true nature of her husband. Second, what an actor Martin Freeman is. The challenge he faced in A Chip in the Sugar, aside from perilously long takes and breathless dialogue rhythms, was avoiding caricature. To play middle-aged mummy’s boy Graham is to play the role Bennett did himself. Yet those quizzical little frowns that we first saw in The Office were deployed with great skill as Graham flipped between prissy pique and his impersonations of his “lav”-frequenting mum. This was the one Talking Head I immediately wanted to watch all over again.”
James Jackson, The Times

“Series two of Second World War drama Das Boot has stretched the narrative to breaking point, particularly with the storyline about stranded U-boat captain Klaus Hoffman (Rick Okon) and his love affair with Harlem jazz singer Cassandra Lloyd (Rochelle Neil). But this is easy enough to forgive. At its core, the series is a study of human values under impossible pressure. Many have been found wanting; others have discovered something fine within themselves.”
Adam Sweeting, The i