“This Saturday night hit has been a welcome burst of day-glo entertainment during a grey winter.” 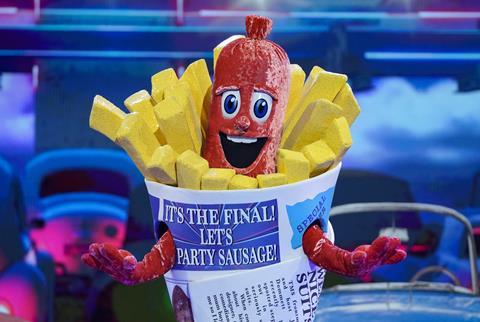 “Cartoonish crooning contest The Masked Singer went out with a banger as soul diva Joss Stone, dressed as a 7ft anthropomorphic sausage, was crowned champion. It made for an irresistibly compelling climax to the reality phenomenon. This Saturday night hit has been a welcome burst of day-glo entertainment during a grey winter.”
Michael Hogan, The Telegraph

“It’s inexplicable that the visually dramatic wildlife documentary Stormborn has been hidden away at Saturday teatimes. This three-part series has stunning photography. Shots of the Northern Lights, animals silhouetted against the sunset and explosions of icy spray on a waterfall were all ravishing.”
Christopher Stevens, Daily Mail

“Class Action Park was the watch of the weekend, a riveting Saturday night documentary telling a story that was insane, outrageous, hilarious – until it wasn’t. It played out like a sitcom, Frank Spencer and Fawlty Towers meets Blackpool Pleasure Beach.”
Carol Midgley, The Times

“The seroes has earned legions of fans thanks to its lavish costumes, lush backdrops and stand out performances. Others, including me, were tiring of yet another serial killer drama. While the show undeniably cared about Sobhraj’s victims and the people pursuing him, too often it felt like the audacity of his crimes was being compared to the adventure of travel. Overall, the series slickly portrayed the intoxicating world of the 1970s hippy trail, but far too often tipped into glamorising a murderer.”
Gwendolyn Smith, The i

“Wholehearted performances – notably from Hawes, Pappas, Lumley, Havers and his scene-stealing dog, Dudley – made the best of uneven material. However, the narrative wheels are coming off as this series progresses. This frankly peculiar hour left so many matters to resolve in next week’s climax that the finale might need to be three hours long at this rate.”
Michael Hogan, The Telegraph

“The undemanding humour that this relies on has its place; it is just that there is a lot of it about and The Crew does little to try to make itself seem different from any of the other American workplace comedies that exist. The Nascar backdrop offers the potential for a unique take, but take away the driver cameos, the odd bit of archive race footage and the vroom-vroom noises and it could be any sitcom, set anywhere.”
Rebecca Nicholson, The Guardian