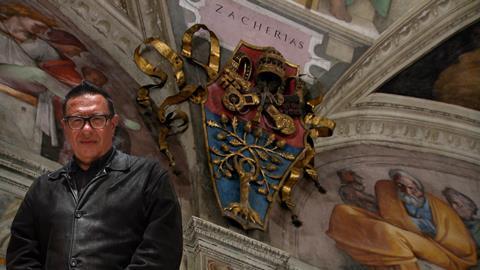 The Michelangelo Code: Secrets of the Sistine Chapel, Sky Arts

“Affable art critic Waldemar Januszczak was weaving together a fascinating secret history of the modern world that unfolded like a blend of Dan Brown, Blackadder and True Detective. It was fascinating but the sheer accumulation of conspiracies and religious mysteries in the two-hour documentary became overwhelming. It was a shame there wasn’t a simpler way to tell the story because the rogues’s gallery of pontiffs and pretenders Januszczak had lined up was gripping.”
Ed Power, The i

“Your starter for ten: what links the Sistine Chapel ceiling with the deadly 1993 siege at Waco? No? We’ll get to the answer in a minute, which will be 100 minutes fewer than Waldemar Januszczak took in last night’s The Michelangelo Code: Secrets of the Sistine Chapel. His delve into the secrets of the world’s greatest ceiling, via obscure symbols and Latin texts, was so probing you can only assume it took him several more years to research than Michelangelo’s frescoes actually took to paint.”
James Jackson, The Times

“It’s all so bizarre that even the writer and director, Gareth Tunley, doesn’t seem certain of what he’s serving us. One minute it’s a blood-soaked satire on coke-snorting, middle-class show-offs, then it’s a police procedural, then it’s a sitcom.”
Christopher Stevens, Daily Mail

“As Sam, the man frantically covering up murder as well as his affair, Tom Meeten’s gaunt desperation can be an inch away from comical. At one point, he gave his bed a damn good thrashing with a pillow, like a panicking Basil Fawlty.”
James Jackson, The Times

“Every episode is conducted at a pitch and volume more suited to the third act of The Towering Inferno. It takes reality television’s ability to build non-problems into a drama (“She has what I call “Bride-solation!”) and then a crisis (“Between the spreadsheets, you gotta get between the bedsheets!”) to somewhere surely near its event horizon – though much as you long for the resultant implosion, it never comes.”
Lucy Mangan, The Guardian

“Two culinary worlds collided as the new series of Snackmasters challenged a brace of Michelin-star chefs to recreate a spread of KFC chicken treats. Gastronomic gladiators Tom Aikens and Alex Bond vied to crack the mystery of KFC’s spicy flavourings in an hour of television that went down like comfort food. Watching the duo obsess over paprika and mayonnaise consistency had a weirdly zen quality. Yet, while the clash of the kitchens premise was a hoot, it suffered slightly from over-enthusiastic presenter Fred Sirieix. The First Dates host seemed thrilled to be there and kept crowbarring in Gallic lingo, as if under the impression Channel 4 viewers had never previously encountered a real-life Frenchman.”
Ed Power, The i