The Other One; How to Stay Young

“The Other One was only a pilot episode but, with such a strong cast and whip-smart script, had plenty of potential for a full series.” 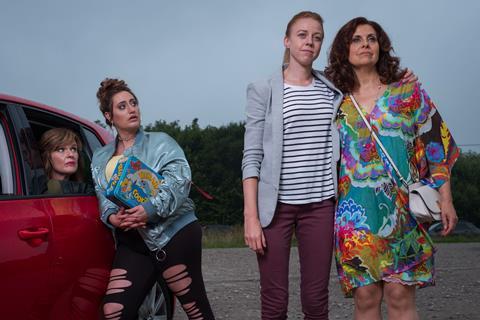 “The odd couple set-up and class culture clashes offered rich pickings, from which creator Walsh and Bafta-winning director Dan Zeff squeezed both cackles and cringes. The Other One was only a pilot episode but, with such a strong cast and whip-smart script, had plenty of potential for a full series.”
Michael Hogan, The Telegraph

“I didn’t much fancy the premise of The Other One. But anything starring Siobhan Finneran and Rebecca Front deserves watching. And in doing so I found I was completely wrong. It was a treat and, at times, very funny.”
Carol Midgley, The Times

“Siobhan Finneran and Lauren Socha as the previously hidden family might be the kind of uncouth, but salt-of-the-earth characters straight out of Shameless, but they both bring subtlety and warmth to what might have been cartoon figures. The Other One’s situation might need a bit more nuance but the performers certainly don’t and for this it deserves a longer run.”
Bernadette McNulty, The i

“If, through the mishap of scheduling, The Other One ends up being ‘the other one’ in the annals of sitcom history and doesn’t get beyond a single episode, that’ll be a crying shame, because Holly Walsh has written something sharp and dark and that gives off a warmth its competitor [C4’s Back] fails to.”
Matt Baylis, Daily Express

“It’s good to see a comedy pilot that is more about character and narrative momentum than it is about gags. And one that doesn’t come with laughter included. I am not convinced the premise screams six-episode series, but I’d be delighted to be proved wrong.”
Sam Wollaston, The Guardian

“Angela Rippon looked remarkably well-preserved for 72 but the best thing here was Dr Chris van Tulleken. Whether it’s on CBBC or prime-time documentaries, he’s an engaging presence with a bedside manner that never lapses into patronising. It’s just a shame this format was so creaky.”
Michael Hogan, The Telegraph

“It was padded out with bucketloads of statistics and graphs. Only a chartered accountant with high blood pressure could really enjoy this show.”
Christopher Stevens, Daily Mail

“We need to know this stuff, we do, but much of it was explained so slowly and repetitively it was as if the documentary-makers assume we have all the intelligence of a sea cucumber. The message was important, but sadly much of it was muffled by relentless background music.”
Carol Midgley, The Times

“The best panel gameshow currently on the telly. What began as an oddball idea at the Edinburgh Fringe has grown in confidence on screen, as its inventor Alex Horne discovered that almost anything is funny once it becomes a contest. If you like your slapstick with a dash of cruelty, this is irresistible.”
Christopher Stevens, Daily Mail

My Hotter Half, E4

“My Hotter Half looks as though it totally fulfils the Channel 4 remit. I think it can claim innovation, and maybe diversity. Plus it will inspire debate among viewers: she’s hotter, no way, he’s hotter…”
Sam Wollaston, The Guardian