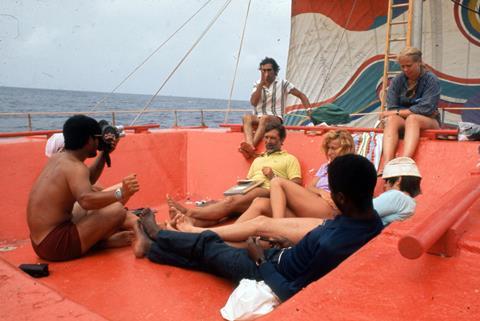 “It is an extraordinary story, beautifully and vividly told and yet at a pace measured enough for you to feel the ebb and flow of history, sympathy and the ever-swelling current of hubris underneath.”
Lucy Mangan, The Guardian

“Marcus Lindeen’s account fascinates, and the reunions we see between these now-elderly voyagers have a very touching warmth and frankness. No one’s fodder for a lofty case study, they firmly take back control of their own story.”
Tim Robey, The Telegraph

“Although it was voyeuristically satisfying to revisit the old footage and hear the seven surviving crew members gathered together four decades later discussing how dreadfully Genovés had behaved during those 101 days at sea, the same problem remained: nothing much happened then so nothing much happened now. You get more tension in ten minutes during a Big Brother breakfast.”
Carol Midgley, The Times

“The term ‘national treasure’ is overused, but in Parky’s case it feels deserved. He even handled Morgan’s constant fishing for compliments with wit and grace.”
Claudia Connell, Daily Mail

“Morgan’s questions are peppered with banter and braggadocio and a narcissistic urge to chat about his own status as host. Parkinson was prepared to blow only so much smoke up Morgan’s fundament.”
Jasper Rees, The Telegraph

“Clips of surviving D-Day veterans sharing their memories were the most moving and enjoyable part of the two-hour programme. After hearing the veterans’ own stories, Martin’s parachute jump fell sadly flat.”
Claudia Connell, Daily Mail

“This could have been a glib and self-indulgent two hours of ‘boys’ toys’ television. But Martin’s obvious respect for the paras’ achievements shone through. Every story was moving, and fascinating, combining to provide a comprehensive overview of a historic day which some of the more conventional tribute programmes to come will be hard pushed to beat.”
Jeff Robson, The i