The Salisbury Poisonings; The Queen and the Coup; Sex in Lockdown

”A solid drama, well-acted and well-researched” 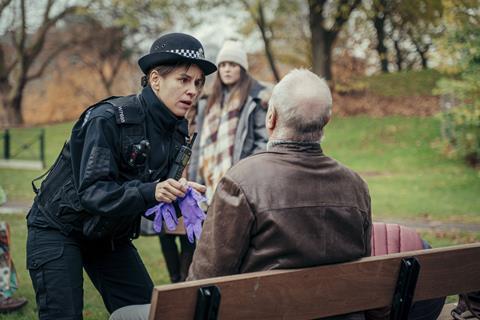 “Adam Patterson and Declan Lawn’s script, together with Saul Dibb’s direction, are admirably restrained. They avoid what must have been an almost irresistible compulsion to indulge in scenes of military-grade labs, armed police filling hospitals and fearful Salisburians being banished from the streets by ever-widening, ever-strengthening cordons. Instead they have conjured something we now know, absolutely, to be much closer to the truth. Instead of hysteria and frantic Drama-with-a-capital-D in the face of an unknown contagion, it shows the disbelief giving way to hard acceptance. The oppressive scale, unwieldiness and essential unknowability of the developing problem is perfectly evoked.”
Lucy Mangan, The Guardian

“This made human and complex the alcoholic whose tragedy, according to MyAnna Buring, the actress who plays her, was underplayed by the media. It showed her letting her daughter down because of the booze, but also how wretched she was about it in the grip of addiction. The Skripals, meanwhile, barely featured save for that opening scene. The writing here was nicely understated, the human stories well-crafted and the unfolding crisis detailed without sensationalism. What struck me was the low-key nature of this public health nightmare, people in lanyards in meetings trying to fight one of the most deadly substances on earth without even knowing where it was.”
Carol Midgley, The Times

“This is a solid drama, well-acted and presumably well-researched because the screenwriters, Adam Patterson and Declan Lawn, are former Panorama journalists. The Salisbury poisonings grabbed attention because they put an English cathedral city at the centre of a spy tale with the hallmarks of a Hollywood thriller. This is retelling history, but also reframing it to ensure that we don’t forget the personal cost.”
Anita Singh, The Telegraph

“But as brilliantly performed, smartly paced and immersively filmed as it was, it was impossible not to view it through the prism of the present crisis and, as such, it gained a chilling, unbidden prescience. The roster of Everymen and women could hardly have been better cast. Rafe Spall was DS Nick Bailey, upstanding and diligent to a fault after becoming infected by the nerve agent while investigating the crime scene in inadequate protective gear. Anne-Marie Duff was excellent as Tracy Daszkiewicz, the competent local health-and-safety mandarin rising to unimaginable challenges. And the glimpses of MyAnna Buring as Dawn Sturgess, ill-fated mother-of-three and recovering alcoholic.”
Gabriel Tate, The i

The Queen and the Coup, Channel 4

“The Queen and the Coup was the juicy tale of how a badly phrased message with a missing noun effectively helped to bring down a government in Iran. Professors Rory Cormac and Richard Aldrich provided terrific detail in a gimmick-free documentary that treated the viewers like grown-ups (so rare!) and from which the US and Britain did not emerge well. Relations with Iran never recovered.”
Carol Midgley, The Times

“As a rule of thumb, if a documentary keeps bashing you over the head with claims that its contents are a bombshell, you will find yourself underwhelmed. This was an interesting footnote in history considerably over-egged. The academics who had uncovered this, Professor Richard Aldrich and Professor Rory Cormac, were rightly proud of the work they had put in, trawling through documents in the Washington archives. It was a fascinating story. But the breathless voiceover and the framing of the telegram as something that changed the course of history diminished their findings.”
Anita Singh, The Telegraph

“The introductory spiel for The Queen and the Coup hinted tantalisingly at a story seemingly purpose-built for The Crown: Elizabeth II interfering in the affairs of a foreign state. Yet it took half an hour for the monarch to appear in the documentary. It was soon apparent why. It was both a rollicking good Cold War yarn of shifting alliances, diplomatic manoeuvres and gentleman spies and a bit of a swizz, overselling Britain’s role in the coup and the Queen’s involvement.”
Gabriel Tate, The i

“What a downright swizz. Two academics lured us into watching their lecture on Persian politics in the Fifties by promising that the Queen was somehow involved in plotting to overthrow the government in Tehran. It wasn’t until the final few minutes that we discovered the mundane truth: a slightly garbled telegram from the Foreign Secretary’s office had caused a spot of fluster in the corridors of Whitehall and Washington. If the professors had wanted to be more straightforward, they could have announced at the beginning that what might seem to be regal malpractice was in fact ordinary skulduggery by the secret services. But openness is rarely the best policy for spies or dons who are eager to be TV historians. Full disclosure from the start would probably have relegated this documentary to a late slot on the Yesterday channel.”
Christopher Stevens, Daily Mail

“This was a cynically cobbled-together affair with the ye olde ad-land maxim of “sex sells” firmly in mind. Its late-night Friday slot and frisky foreigners gave it the flavour of 1990s fixture Eurotrash, only without the Gallic charm. Anna Richardson  was roped in to present this hour of gratuitous grot. She promised an X-rated exposé of our “sexual relations in isolation”. What she delivered was more like a sort of saucy seaside postcard version of Gogglebox. Snogglebox, if you will. Much of it was based around Ann Summers stats and the results of a specially commissioned sex survey. This was fluffed out with featurettes, vox pops and C-list celebrities.”
Michael Hogan, The Telegraph