The School That Tried to End Racism; Make Me Famous; Britain’s Best Parents 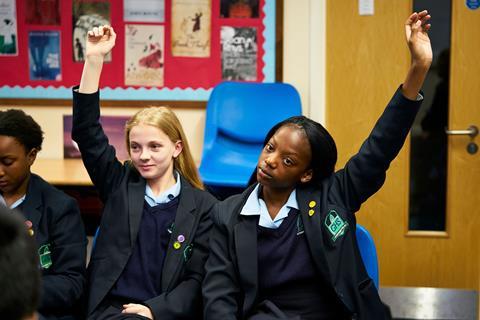 The School That Tried to End Racism, Channel 4

“When the classes came together they talked about their differences. White pupils wanted to know what was and wasn’t appropriate to ask about race and black pupils spoke with pride about their heritage. It ended with what Mahkai called ‘the most racist sports day ever’. The children ran a race from different starting points. Pupils whose parents had English as a first language took a step forward, those who’d ever been in a room where nobody else looked like them took a step backwards and so on. It was a brave and thought-provoking initiative but what shone through was how bright, kind and open to discussion the children were.”
Claudia Connell, Daily Mail

“Although this experiment took place in a school, the documentary-makers sometimes seemed to think that the viewers were children too, with that irritating CBeebies-type music that they must think makes the content more palatable, but has the opposite effect. However, it was interesting to see what an effect segregating them by skin colour had.”
Carol Midgley, The Times

“It’s an immediate testament to the trust parents must have in the school (which plans to incorporate the scheme into its curriculum if it proves worthwhile) that it was able to recruit for and implement so difficult an endeavour. The 24 year 7 pupils who take part are confident, thoughtful and articulate, and possess in full measure the charming and unmistakable guilelessness of pre-adolescents: they are a testament to the safety and security the place affords them. And the deftness and grace of the teachers involved – notwithstanding the special training they underwent first – and their perfectly pitched delivery of increasingly challenging content is quietly awe-inspiring.”
Lucy Mangan, The Guardian

“It lost its way slightly in the middle with some clunkily expositional dialogue in a nightclub about how contestants are “edited and produced” on the show to look a certain way. I think we all know that. But towards the end when, rejected by his agent for being past his shelf life and receiving an avalanche of hatred and #killyourself messages, Billy took an overdose, it was skilful. Suddenly, having survived, he was bankable again for “mental health” reasons, and the messages, probably from the same people, changed to the #mentalhealth #bekind variety. Just as they would in real life. A clever modern parable.”
Carol Midgley, The Times

To the final of Britain’s Smuggest Parent - sorry, Britain’s Best Parent? - which was a contest in which couples battled it out to prove that their particular brand of child-rearing was the one we should all be following. A concept to make you wince, made watchable by fond imagining that these children will one day grow up to be the exact opposite of what their parents intended.
Anita Singh, Telegraph

“Each had a different approach to raising children and each was convinced theirs was the right way. Would it be Becky and Ben, who home educated, didn’t believe in timetables and whose children are surely in for a rude awakening when they start work? Strict Nicky and David fought a good fight — as did Jen and Tom, who wanted children to make fires and get dirty outdoors. The title went to Rin and Robin, who believed in making children partake in ‘scholarly and warrior pursuits’, which appeared to be playing chess and doing Karate. Best parents? Debatable. Smuggest? Undoubtedly.”
Claudia Connell, Daily Mail