The Singapore Grip; Extinction: The Facts 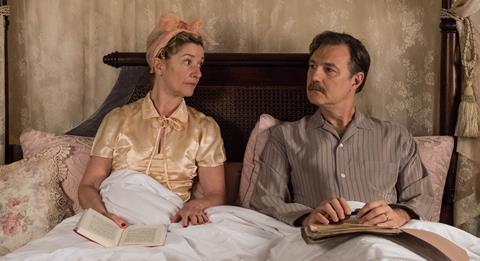 “The TV version lacks bite JG Farrell’s novel. What we get is more akin to a cosy Jeeves and Wooster-style comedy, with everyone but Charles Dance aiming for a sort of high camp. It ends up looking like any other jolly ITV drama. Screenwriter Christopher Hampton has filleted the novel but screened out the wit.”
Anita Singh, The Telegraph

“The fact that the story is supposed to be satire makes it all the more strange that it lacks any bite. It’s all very Sunday evening. Almost everything, even the military scenes, are awash in an oddly pitched humour that feels as if it has been cast between two poles, neither vicious nor silly enough to make sense of telling yet another colonial story from an almost entirely white perspective. This is a middling drama that fails to deliver what it promises, and it is all rather frothy.”
Rebecca Nicholson, The Guardian

“The Singapore Grip is an odd fish all round. ITV’s adaptation of JG Farrell’s satirical novel is sumptuous, but tonally strange, knowingly overacted and hammed up to big band music with David Morrissey playing against type, and with an ill-advised moustache, as ruthless posho Walter Blackett. Aesthetically it is a treat, but plot-wise not, er, gripping.”
Carol Midgley, The Times

“Something was missing from this adaptation. Though it was beautiful to look at, little of the book’s satirical depth came across last night. The next five episodes need to raise their game.”
Claudia Connell, Daily Mail

“It’s all a little jolly hockey sticks for an era of great atrocities inflicted on native Singaporeans. But the greatest fault of The Singapore Grip is that it’s dull. Had ITV turned up the satire and used the eccentric plushness of colonial life to highlight the terror of an incoming occupation, The Singapore Grip could have been a thoughtful rumination on British history. Unfortunately, it’s nothing more than an old-fashioned, cushy period drama.”
Emily Baker, The i

“The most important programme this week, if not this year, was Extinction: The Facts, a horrifying, depressing, fury-inducing hour that at times was unbearable to watch. Attenborough, like a sad prophet, pulled few punches in telling us what we have done. But in the last ten minutes, with that lovely clip of mountain gorillas, he showed how nature can bounce back if we just stop voraciously consuming and give it a chance. Devastating TV.”
Carol Midgley, The Times

“The facts were delivered simply and directly. But Attenborough and his producers know that stories about animals exert an emotional pull. After the lonely story of the last two northern white rhinos on Earth, we returned to the classic footage of Attenborough with gorillas in the foothills of Rwanda. That gorilla population is now thriving – a hopeful ending to an otherwise bleak narrative.”
Anita Singh, The Telegaph

“Extinction may be a natural process but it is happening 100 times faster than the natural rate of evolution — and our consumerism is to blame. Even Sir David Attenborough’s dulcet narration couldn’t distract from how calamitous things are. Usually full of joy and wonder at the natural world, Sir David was angry and emotional.”
Claudia Connell, Daily Mail

“Attenborough and his army of scientists and environment experts barraged us with information that all pointed to one damning conclusion: the ecosystem is devastatingly close to collapse and it’s all our fault. This documentary was a vital source of education. It should be mandatory viewing for those not pulling their weight in the effort to save the world – governments included.”
Emily Baker, The i