There She Goes; Manhunt: The Raoul Moat Story; P-Valley 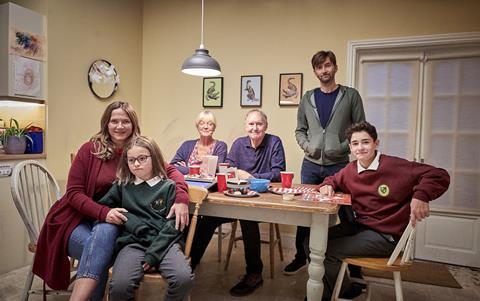 “This is a gentle comedy with a disarming frankness. There are plenty of new series that emphasise the unglamorous reality of being a parent, and they find their sweet spot in the parental grind. But the humour here is more convincing than most. Despite the gallows humour here, there is both a deliberate lack of sensitivity, as Simon cracks uncomfortable jokes to break the frequent tension, and a full understanding of how sensitive it needs to be and when it needs to be so. Switching between the two timelines can be a little jarring for a half-hour comedy, but this is wonderful writing backed up by excellent performances, and its spiky compassion is a treat.”
Rebecca Nicholson, The Guardian

“Crucially, you never feel the series is in danger of slipping into the gruesome territory of mawkish sentimentality. In a horribly sobering moment, Simon says that this is a school whose half-term newsletter sometimes has an obits section. Yet these bleak moments are not dwelt upon. Simon and Emily lurch from day to day, but then there’s a break in the clouds and a shaft of sunlight shines through.”
Carol Midgley, The Times

“The first series was hidden away on BBC Four, a sign that commissioners weren’t entirely confident about it. Now it is on BBC Two, which feels right. The tone can be uneven - but then, isn’t parenting like that? In its gentleness, it reminded me of Channel 4’s refugee comedy, Home - another series that takes what could be a bleak subject and tempers it with humour and hope and little moments of joy.”
Anita Singh, The Telegraph

“There She Goes captures the exaggerated sense of chaos mingled with a secret pride that is familiar to many parents of wildly difficult children. We’ve learned to admire their ability to ignore all social conventions. This is the second series, and it’s a pity that they’ve stuck to the half-hour format. Peter Bowker’s full-length drama The A Word on BBC1 shows what can be done with similar material, by exploring the toll taken on all the family. I’d love to know more about how Emily bears the strain, and the effect on Rosie’s big brother, Ben (Edan Hayhurst).”
Christopher Stevens, Daily Mail

“So there was nothing intrinsically wrong with ITV commissioning Manhunt: The Raoul Moat Story, letting the detectives recount those events and take us to the heart of the police operation. True crime documentaries are always popular and this one had dramatic tension as the days ticked by with Moat still in hiding, ending up with a fatal stand-off in the market town of Rothbury. However, there was a tone-deafness about the project. Because here was a police officer lamenting: “We focused on Raoul Moat, we focused on the manhunt, but it seemed to me we forgot about the most important people here: the victims,” in a documentary called Manhunt: The Raoul Moat Story, and one which gave almost no time to the stories of either Stobbart or PC Rathband.”
Anita Singh, The Telegraph

“This stingingly fresh Starz series by playwright Katori Hall about a strip club in the Mississippi Delta, frequently strips the pole dance of its sheen. Many of the strip sequences and P-Valley’s ethos at large, is un-exploitative and deliberate, a reorientation of the strip club to its workers and chosen family. Like Hustlers P-Valley navigates the humming ecosystem of the club. It’s a swirl of business acumen required in selling fantasy for cash, the strategy of working the floor, stripping as an economic and mental game of navigating social hierarchy and the line between performance and intimacy. But whereas Hustlers’ arc hinges on one long ruse – the one-last-job fleecing of unsympathetic finance bros – P-Valley instead views dancing as work and art, its signature Pynk Club as a home base worth fighting for rather than escape.”
Adrian Horton, The Guardian