“Escapism at its trashiest, which is great, as long as you don’t think about it too deeply” 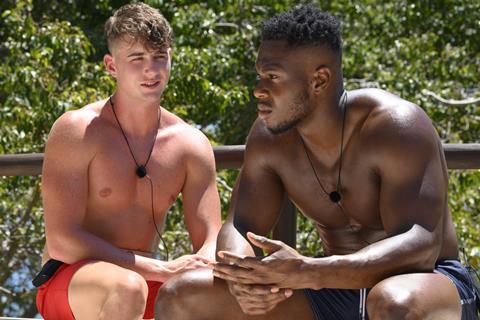 Too Hot to Handle, Netflix

“It is Love Island, trimmed to its leanest and meanest, and it is Love Is Blind, with its pseudo-educational streak. The hope is that, at the end of it, these previously sex-loving, relationship-rejecting men and women will experience some woolly concept of “personal growth”. I did not feel good about gobbling up all eight episodes, nor could I stop myself doing it. It will, inevitably, be massive.”
Rebecca Nicholson, The Guardian

Stacey Dooley: Locked up with the Lifers

“Stacey Dooley’s unpretentious approach in Locked up with the Lifers probably helped in a place like the Iowa Correctional Institution, where the women were treated humanely, allowed pet dogs and takeaway pizza. How you cope mentally with no parole, no hope, no incentive to behave, is a fascinating question.”
Carol Midgley, The Times

“Such a lax take on the prison system is ripe for proper interrogation. It was a shame that this documentary felt just like any other film about incarceration. Less focus was given to the inmates’ apparent freedom, with Dooley instead focusing on the usual tropes of their crimes, what it’s like to not see your family, and whether they think they’ll ever be released.”
Emily Baker, The i

“Julian Fellowes certainly didn’t opt for subtlety in this climax, but as escapist ostrichism goes it wasn’t bad. OK, it was sometimes quite bad. And comically hammy. It ended exactly as we all knew it would from day one, with Charles Pope the rightful heir and a happy wedding. I just wish there had been more verve and wit to this series, which never felt like it got out of third gear.”
Carol Midgley, The Times

“Six episodes we’ve waited for Charles Pope to discover the truth about his background, six hours of being set up for this wonderful, tear-jerking moment with the two families he never knew he had. And they diddled us out of it. Or, as writer Julian Fellowes might have put it: “By God, Sir. How could you?” Perhaps Fellowes simply didn’t have the time. The final episode wrapped things up at breakneck speed.”
Anita Singh, The Telegraph

“So far this thriller is still lacking any real thrill. After two episodes of plot catch-up, it’s time for the ride to get going again; the next one really needs to kick both the action and the story up a notch.”
Catherine Gee, The Telegraph

“Killing Eve was once so much more thrilling and inventive than that. Characters got killed, of course, but they weren’t actually dead — it was an illusion. Be under no illusions about the decline of this series. Someone must have strangled the costume designer and throttled the life out of the dialogue, too.”
Christopher Stevens, Daily Mail

One World: Together at Home, BBC1

“There was of course a rather luvvie-ish tendency on show here, that the world will be soothed with the divine gift of song; the weariest health workers watching might have preferred a donation of funds for PPE rather than pop power couple Shawn Mendes and Camila Cabello. But these performances are often beautiful and display rare gifts.”
Ben Beaumont-Thomas, The Guardian