“It might have miles on the clock, but this trio injected some va-va-voom” 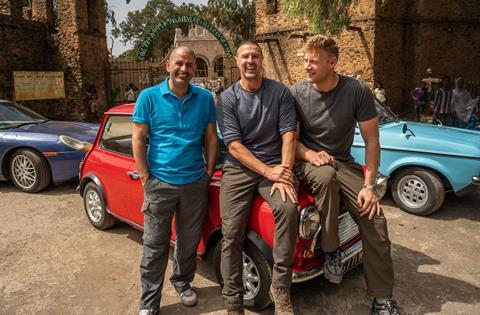 “Top Gear might have miles on the clock, but this trio injected some va-va-voom. Their chemistry was immediate, their camaraderie warm. There were signs of a more inclusive and, dare I say, more millennial tone to the new show.”
Michael Hogan, The Telegraph

“Away from the contrived studio scripts and on a road trip in Ethiopia they stopped trying too hard, relaxed and became really quite funny. No off-colour jokes were to be found and there was less — what was it? Yes, less smart-arsery. You could believe this trio were real mates, even though you knew it was a TV Tinder date.”
Carol Midgley, The Times

“It gives me no particular pleasure to suggest that some of the original magic of Top Gear has been rekindled by this unlikely trio, but, miraculously, it has. The larky, bad-tempered chemistry that existed between Clarkson, James May and Richard Hammond has been replicated in a slightly sunnier form, and with a fresh energy. The old format has life in it yet.”
Tim Dowling, The Guardian

“It’s a relief to report that the latest trio works surprisingly well. The laddish bantz are still there, of course. But there are none of the rather desperate attempts to outdo each other in non-PCness that Clarkson, Hammond and May have taken to such tedious lengths in The Grand Tour. You instead get the impression these are three men who genuinely enjoy each other’s company and regard driving cars in extreme conditions as the best job in the world.”
Jeff Robson, The i

“This format died when Chris Evans took over. Now it’s zombified. Surely the BBC execs hurling money at it, with the trio enjoying a lengthy junket to Ethiopia, must see that this is undead TV. Every ad lib sounds over- written, over-rehearsed or more banal than the small talk in The Kabin on Coronation Street.”
Christopher Stevens, Daily Mail

“Just like the mothership show, it was a joyous hour of gentle comedy and unfiltered domestic micro-drama.”
Michael Hogan, The Telegraph